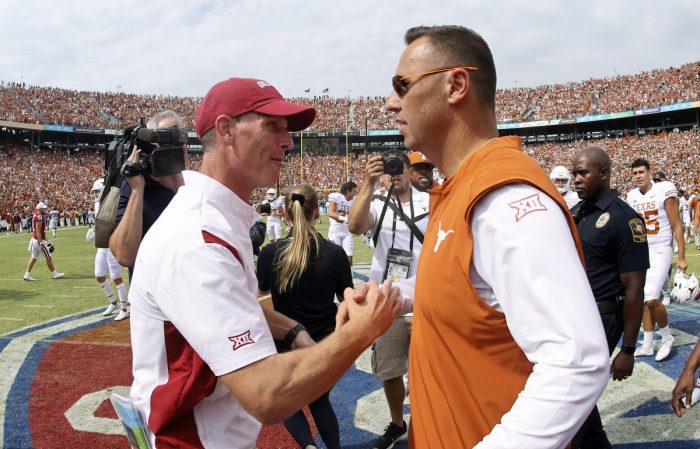 The move for Oklahoma and Texas to leave the Big 12 Conference early continues to have legs. In a new report from The Athletic, the two sides have been talking for months about an amicable divorce by 2024, instead of 2025, which is when the two schools were expected to be leaving.

According to The Athletic, the tone really changed between the two sides last week. Big 12 officials held a meeting in Las Vegas, and there was a point in the meeting when Texas athletic director Chris Del Conte and Oklahoma athletic director Joe Castiglione were recused because officials were discussing future business. Following this meeting, “momentum” emerged for an early exit, according to an administrator within the SEC. An administrator within the Big 12 confirmed to The Athletic that the tone in the league regarding this topic shifted after that meeting.

“They’re definitely engaged on it and moving towards something where they will leave after next season,” a Big 12 school official said.

“It’s likely they are leaving early,” said a person with knowledge of the discussions.

This may be the best move for everybody involved, as the Big 12 is set to welcome in Houston, BYU, UCF and Cincinnati for the 2023-24 athletic season, which was going to create two awkward seasons of 14 members. If Oklahoma and Texas leave early, it will only create one season with 14 members.

On top of that, the SEC’s new television deal with ESPN begins that season, along with the 12-team College Football Playoff. Also, this move would match up the SEC’s expansion to 16 teams at the same time as the Big Ten’s expansion, when they add USC and UCLA.

The buyout remains a sticking point, which could conceivably push $90 million per school, but expectations are that number will be drastically decreased, but the question remains how much. Also of note,

Also, we should keep a close eye on these next two weeks because according to Big 12 bylaws, a member must give at least an 18-month notice of its departure date. That letter would have to arrive by Dec. 31 if they intend to join the SEC on July 1, 2024. However, it’s fair to say that date, like everything, is negotiable.