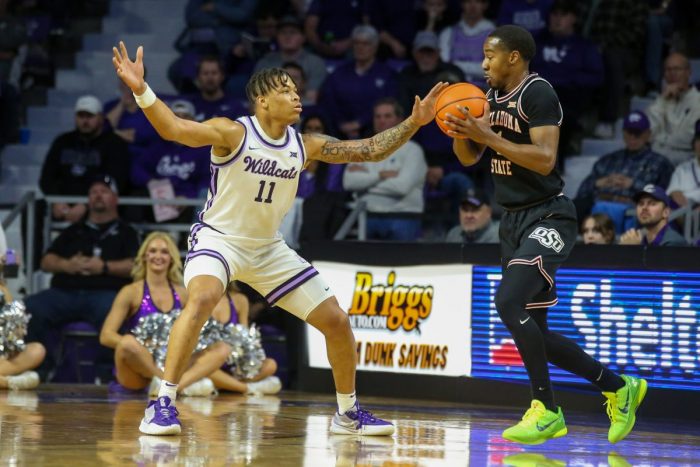 At least one Big 12 coach believes that Kansas State forward Keyontae Johnson is playing himself into the first round of the NBA Draft.

That coach — Texas Tech’s Mark Adams — got an up-close look at Johnson and the Wildcats during a 68-58 loss to the No. 13 Wildcats.

Johnson played a big role in the win for Kansas State, during which they needed to rally in the final 10 minutes.

Johnson finished with 15 points and 11 rebounds for a double-double and also dished out three assists.

That prompted Adams’ quote after the game.

Johnson’s story is one of the best in college basketball. Forced off the floor due to a medical emergency two years ago, Johnson transferred to Kansas State in the offseason and played his first game in nearly two years in K-State’s opener.

From that point, he’s been one of the league’s best players and has put himself in consideration for Big 12 Player of the Year. He is averaging 18.7 points, 7.2 rebounds and 2.4 assists per game for a Wildcats team that will likely jump into the AP Top 10 next Monday.

Markquis Nowell bounced back from a poor game against Kansas on Tuesday with 23 points, eight rebounds and five assists. Ismael Massoud came off the bench to score 15 points.

Richard ‘Pop’ Isaacs and De’Vion Harmon each had 13 points for Texas Tech.