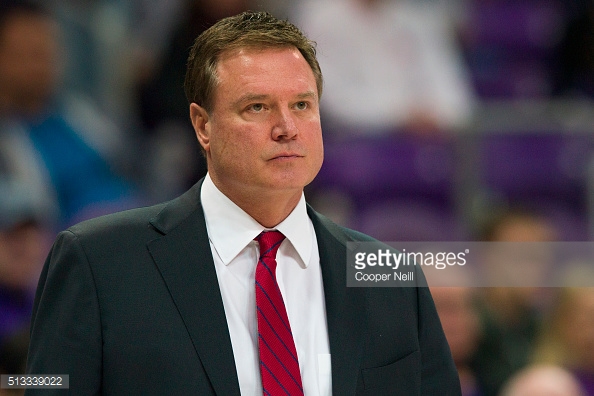 One down, five to go. The Jayhawks offense proved to be too much for the Austin Peay Governors as they dropped an impressive 105 points in a 105-79 win Thursday. The team shot a 55.7 field goal percentage while tallying a total of 23 assists. The bench was the story of the game and Sviatoslav Mykhailiuk headlined the day scoring 23 points off an ultra efficient 9-11 shots (4-5 from three point range). Jamari Traylor was held scoreless but had a major impact on the game through his hustle plays and superior effort totaling 9 rebounds, 2 blocks and 2 steals. Landon Lucas had a great game as well with a new career high in points (16) along with 8 rebounds, and Perry Ellis had a very Perry Ellis like game with 21 points of his own. Although the offense was strong, the defense did struggle and allowed the Governors to shoot 41 percent while giving up a scary 51 points in the second half. Another alarming stat was the foul total for KU, as the team totaled 27 personal fouls. This type of play is acceptable against weaker opponents like Austin Peay, but will not be good enough to win against bigger and better tams that the Jayhawks will see this March, including 9 seed UConn on Saturday.

It is no secret that Kansas has struggled in the NCAA tournament in recent years. Generally the team heads into March as one of the nation’s top seeded teams, but the seeding hasn’t always matched the production come post season time. There are a number of possible reasons for this. One could be that playing in what is usually one of the nation’s best all around conferences takes a major toll both physically and mentally on the team throughout the year and by the time March begins, there is just not much left in the tank. Another possibility is that March Madness presents a great deal of pressure that leads to unpredictable and erratic play.  Head coach Bill Self has recognized this in past years, coming up with team slogans such as “no pressure, no diamonds.”

Self decided to take a different approach this year. Instead of focusing on the pressure that comes with March and how to deal with it, Self wanted his team to shift their focus to something much simpler, having fun. This sounds like a very easy thing to do… to have fun playing the sport you love, but often times pressure can knock a player’s confidence down which in turn decreases their effectiveness in every way. Ever since Self introduced the concept to his team a few months ago (in the midst of loosing 3 of their last 5 games) the Jayhawks have taken off. It has been very noticeably making a difference, as it is easy to see when watching the Jayhawks that they are truly enjoying both the game and each other.

The player who has seemed to benefit the most out of this all has been sophomore guard Devonte Graham. Graham has caught fire in the last month of the season shooting lights out, dishing out assists left and right, and playing with swagger and confidence. He is averaging 11.7 points per game this year compared to 5.7 last year and is also shooting 44% from beyond the arc. Graham has also vastly improved his defense from last year and is averaging 1.5 steals per game compared to only 0.9 last year. The team as a whole has really turned it on as well, winning the Big 12 championship and bringing momentum into March as the overall number 1 seed.

After back to back years of losing in the second round of the tournament, the Jayhawks need to make a deep run this year. This team is too good, experienced, deep and confident to not advance into the later stages of March Madness. Guards Frank Mason, Devonte Graham and Wayne Selden have all been major contributors all year and make up what is probably the nations best backcourt. Senior forward Perry Ellis has been a beast, scoring 16.7 points per game while moving closer each game to becoming a top 10 Jayhawk all time for both points and rebounds. Ellis could solidify a spot in the Allen Fieldhouse rafters for his jersey with an NCAA championship win in his last year with the team. Landon Lucas has even came into his own and proved to be a very respectable starting center for the Jayhawks with his strong rebounding ability. On the bench there is also a great deal of talent to back up the starting five. Both Sviatoslav Mykhailiuk and Carleton Bragg have really improved towards the end of the year and are very solid pieces off of the bench. Senior Jamari Traylor has been a consistent presence and role player as well. Freshman big man Cheick Diallo is also very talented and although the results haven’t necessarily shown it yet this year, he could impact a game at anytime with his high motor. Junior Brannen Greene also provides depth with his lights out outside shooting ability (he is also an excellent free throw shooter, which is especially valuable toward the end of games in March).

Overall, there is a reason that this KU team comes into the tournament as the number one overall seed. It is because they are legitimately the best team in the country. Whether or not the results will show that at the end of the tournament have yet to be seen, but in finishing a full two games ahead of the rest of the incredibly strong Big 12 and then following it up with a Big 12 championship win, the Jayhawks have proven that they have as good a chance as anyone to bring home a trophy on April 4th.

The Baylor Bears and the Wild West (Region)
What happened, Baylor?
To Top