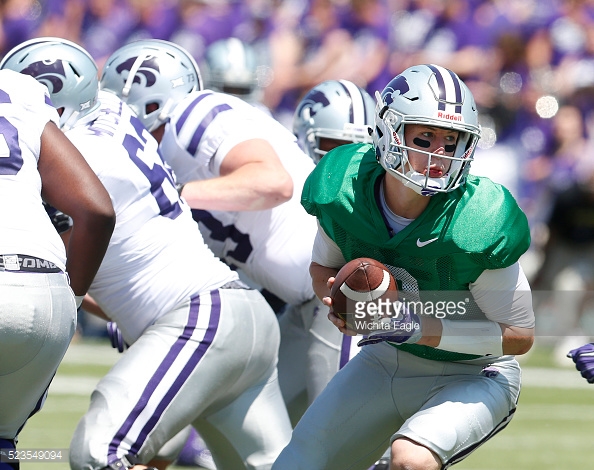 Kansas State fans got their first look at the 2016 football team as the annual Purple and White Spring Game was held Saturday at Bill Snyder Family Stadium.

The start of the season may be a ways off (technically 130 days until the opener against Stanford, but who’s counting?), but it’s always nice to catch an early glimpse of what’s in store for the upcoming season. Perhaps the most intriguing story line on the minds of Wildcats fans heading into the game was the quarterback battle. After watching the game, it seems that coach Snyder is keeping his options open as the Cats have several guys that are more than capable of landing the starting job. Since Tyler Lockett, the Wildcats have been searching for an offensive playmaker that can change the game in an instant. Those are some big shoes to fill, but today’s game could have revealed some potential successors to the Wildcat legend.

A total of three quarterbacks alternated between the Purple and White squads which included senior Joe Hubener, junior Jessie Ertz and redshirt freshman Alex Delton. Hubenber led the quarterbacks, going 21-of-25 with 319 total passing yards along with two touchdown passes. Ertz also had a touchdown pass in the game as he went 12-of-18 with 124 passing yards. Delton also put on a solid display as he finished 13-of 21 for 139 yards.

The most impressive debut was, without a doubt, the transfer from Butler Community College, Byron Pringle. During his first outing in a Wildcat uniform, Pringle caught nine passes for 163 yards, including an impressive 73-yard bomb from Hubener for a touchdown. Though a bit overshadowed by Pringle, freshman wide receiver Corey Sutton also had a strong debut with 85 yards receiving and a touchdown.

It’s still a long road to the start of the 2016 season (um, 130 days, exactly, am I counting?), but Snyder seems to have his team progressing nicely. After injuries plagued the team last season, it was nice to see a variety of Wildcat quarterbacks in action. The quarterback race is definitely far from over and could even continue into the first few games of the season. I wouldn’t even rule out the possibility of a multi-quarterback system. This is something we know Snyder isn’t afraid to do after experimenting with a two-quarterback system in 2013 with Jake Waters and Daniel Sams.

Regardless of who lands the starting job at quarterback this season, it is essential the Cats find some offensive support. Last year, K-State ranked 2nd to last, only to Kansas, in average yards per game. Yes there were injuries, but that side of the ball must improve. While it’s nearly impossible to use spring game statistics to determine if a guy is going to have a good year, it’s definitely encouraging to see the early success from Pringle and Sutton.

It will be interesting to continue to follow this Wildcat team throughout the summer months as they look to rebound from a 6-7 season. Going off of what I saw in the spring game, I’d say the Wildcats are off to a great start. Snyder and company will open the 2016 season with a nationally televised match up at Stanford on Friday, September 2 (only 130 days away).