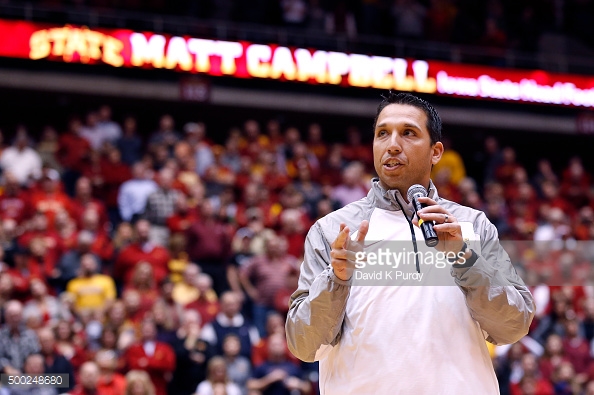 He hasn’t even coached a game yet, but Iowa State’s new coach Matt Campbell has been as good as advertised. To say something is brewing in Ames is easy, the real question is: how big can the storm get?  To sum up the class of 2017 recruiting efforts so far in one word: historic.  It seems like nearly every other day another notable 3-star is verbally committing to the future of this perennial doormat.  There’s the feeling that ISU is ready to make the move to be a major competitor sooner rather than later.  A huge key to this success is due to the staff of rising coaching star Matt Campbell.

Campbell’s staff has done a great job recruiting in the state of Iowa. They snagged commitment’s from 3-star offensive linemen Colin Newell and Alex Kleinow, along with fellow 3-star linebackers Jake Hummel and O’Rien Vance.  Another name to keep an eye on is Devon Moore, a 6’4’’ lefty QB recruit from Waterloo. He’s underrated and with a good season could rise up ranking boards.  Keeping these type of impact recruits from Iowa away from Iowa City has been a huge priority of the new regime.

ISU has 17 players committed for the 2017 class.  According to Rivals, 13 are 3-star recruits.  While the sheer amount of players of that caliber is almost unheard of at least for Iowa State, at this point in the recruiting season this is historic for Cyclone Nation.  The enthusiasm of wanting to do something big in Ames has been centerfold, and you can sense that the tide is turning at the right point.  Recruits continue to reference the loyalty of the Cyclone faithful, the great facilities, and most importantly, the belief in Campbell and his vision for what they can accomplish.

The latest to join the party is 4-star safety Kam White from Clinton, Mississippi.  White chose the Cyclones over numerous SEC offers including Florida, Ole Miss, and Auburn, among others.  He should be able to compete right away for a spot in ISU’s secondary. The Big 12 is loaded with skilled pass catchers, so big physical safeties like White are needed in order to compete from week to week.  He could be the gem of this class for the Cyclones.  A couple other defensive backs to mention are Quaran Hafiz, Richard Bowens III and Octavious Morgan.  These three, along with White should be able to help solidify the secondary in the future.  They added speedy receiver in Joshua Johnson and plucked Tyler Jost right out of Big Ten country.  This is the start of something big.

With less than 30 days till kickoff at Jack Trice Stadium, the enthusiasm is rising and everyone can’t wait till the season starts.  I know I haven’t been this excited about Iowa State Football since the botched attempt of Gene Chizik potentially reviving the program, “The Run” and the days of program legend Seneca Wallace.  A storm is brewing in Ames and the future is bright.  Rise up Cyclone Nation.