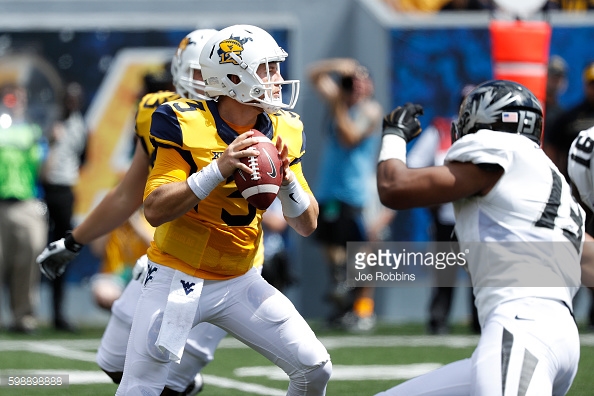 West Virginia squared off against Missouri on Saturday, defeating the Tigers 26-11 at Milan Puskar Stadium.

Not only did the Mountaineers beat an opponent from the SEC, but they did so with relative ease, controlling the game from the national anthem all the way through “Country Roads”. West Virginia’s offense racked up 494 total yards, the most Missouri has given up since losing to Alabama in the 2014 SEC championship game. WVU expected the success of their ground game from last season to carry over into Saturday, and it did just that. Rushel Shell carried the ball 16 times for 90 yards and a score before leaving the game with leg cramps. Justin Crawford didn’t miss a beat while relieving Shell, scampering through the Tigers’ defense for 101 yards on 21 carries, matching Shell’s score. If there’s one thing we should know about head coach Dana Holgorsen, it’s that his teams’ are going to run early and run often. With 241 rushing yards against an SEC defense in week 1, I’d say he accomplished his goal.

Other Mountaineers limped away from action early Saturday, including left tackle Yodny Cajuste (knee injury: return timetable unknown) and quarterback Skyler Howard (bruised ribs). Howard left the game in the 2nd quarter, forcing Holgorsen to turn William Crest and Chris Chugonov loose. Crest fumbled a snap with his opportunity, while Chugonov threw a pick. Luckily, Howard rejoined his teammates in the 2nd half, not to the surprise of his head coach.

“There’s a reason he’s started the last couple years,” said Holgorsen. “There are a lot of people that have questioned that. He’s a seasoned, smart, competitive kid that understands exactly what we’re trying to do.”

Fans dream of 500 yards passing and 5 touchdowns from their quarterback, but 253 in the air and 35 on the ground isn’t much to complain about; especially when your QB is a good decision maker and two of your RBs hover around the century mark. When this team hits their stride, combining the running game with the passing game’s potential, WVU will ascend to the top of the Big 12. I hear you, “You think they’re that close?” Performances from other Big 12 teams, both ahead and behind the ‘Eers, have tightened that gap.

Did you watch Houston dominate Big 12 favorite Oklahoma? The Sooners are routinely in position late in seasons to make a run at the national title, but ultimately falter. This season? OU wanted to get that loss out of the way early. With the Boomer Sooners scrambling after that loss, WVU fans should be encouraged. How about the scare TCU had from South Dakota State? Scoring 59 points is impressive for any team, but surrendering 41 to a Missouri Valley Conference team is alarming. The Big 12 as a whole only suffered three losses (OU, Kansas St., & Iowa St.) opening weekend, but the rest of its members won by an average of 39 points. So while the top of the Big 12 may not be as strong as we thought, the lower tier could be surprisingly impressive.

The biggest question mark coming into the game for WVU was its defense. How would they fare after losing leader Dravon Askew-Henry to a preseason knee injury? That answer was revealed Saturday as the ‘Eers stymied Missouri’s offense, holding them to a mere three points in the 1st half. WVU forced the Tigers into 24 3rd downs, only converting 10 of them. The run defense was good but can be improved, as they gave up only 180 yards on 47 carries (3.8 ypc). One area West Virginia must improve to emerge as a threat is turning their opponent over. WVU threw 2 interceptions and lost a fumble themselves, but only forced one fumble by the Missouri Tigers. When things get tough, turnovers can make or break drives; thankfully, WVU dominated every other facet of Saturday’s game. Defensive coordinator Tony Gibson had this to say postgame to his nonbelievers.

Youngstown State visits Milan Puskar Stadium on Saturday, September 10 to face the Mountaineers. Can WVU’s air attack generate a score? Will their defense put a stranglehold on the Penguins’ offense? Tune in at 2 p.m. next Saturday to find out.