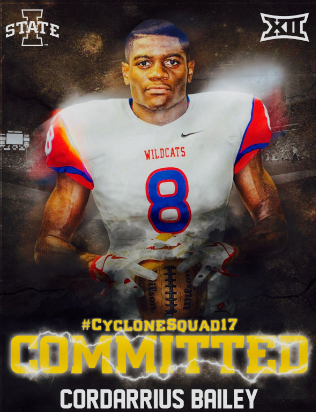 Despite a tough loss to Northern Iowa in Week 1, that hasn’t slow down Iowa State coach Matt Campbell on the recruiting trail.

On Thursday night, Iowa State landed a verbal commitment from hybrid linebacker/defensive end Cordarrius Bailey, who ended his recruitment and committed to the Cyclones.

Bailey is rated the No. 31 overall weakside defensive end in the 2017 class and is now Iowa State’s second-ranked commit behind another Mississippi native, Kam White.

Bailey is listed as a 3-star recruit by both 247 and Rivals. His other interest reportedly came from Louisville, Colorado State, Mississippi State, Memphis and others.

Below are a look at Bailey’s highlights! #CyclONEnation