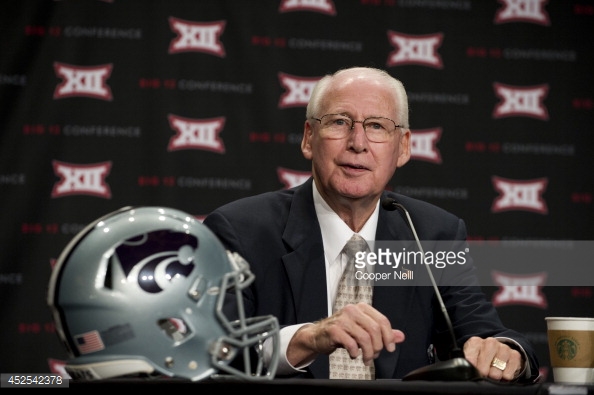 Athletes kneeling during the National Anthem has become all the rage across several sports in recent weeks, in an attempt to allegedly bring about awareness for the justice system and how it deals with African Americans.

It all started during the NFL preseason with San Francisco 49ers quarterback Colin Kaepernick, but has continued with others in the NFL, even making it’s way into women’s soccer, and now college football. On Saturday, three Nebraska players knelt during the National Anthem.

When it comes to Manhattan, Kansas, the K-State Wildcats aren’t out on the football field during the National Anthem. But, when questioned, K-State football coach Bill Snyder gave his thoughts Tuesday on kneeling during the anthem.

“I mean that’s what the flag stands for everybody has their right to speak their opinion…I think it’s important to be able to say what you believe in. I think hopefully it’s not misguided. You know hopefully that when people speak out the hope is that they do have a passion for their country and they do want to see it better. Don’t we all? I think if you have an issue and you have a strong belief in certain things and then yeah you should have a right to speak out.”

Snyder is in his 25th season coaching at Kansas State. While I have been steadfastly against and ashamed of anyone kneeling during the anthem, I understand football coaches have a fine line to walk when it comes to this issue.

Do you agree or disagree with Snyder’s thoughts? Let us know in the comments!

Les Miles to Kansas State? Don’t count on it
Big 12 Game of the Week Preview: West Virginia vs. Kansas State
To Top