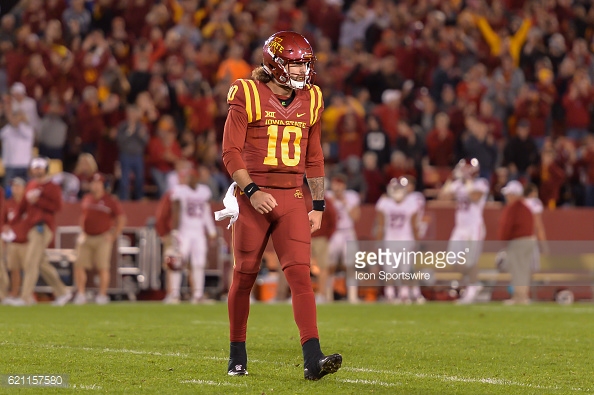 After Thursday night’s 34-24 loss to Oklahoma on Thursday night, Iowa State head coach Matt Campbell said, “Believe me, not one person in our program is giving up on Joel Lanning.”

Well, that’s just not true. This is now Jacob Park’s team. That’s clearly what Campbell and the staff want and what they implied when Lanning threw one pass all night against the Sooners. But, instead, Campbell has been tiptoeing and hedging about where the two quarterbacks stand in this program.

When it came to the decision to start Park, Campbell said, “We just thought he’d give us the best chance against this team early in the game.” What I believe Campbell meant to say was that he believes Park “gives us the best chance to win every game we play from here on out, in 2016 and beyond.”

Joel Lanning deserves the truth. He has been a trooper for a poor Iowa State program in the past couple of seasons. The junior quarterback has played in 20 games over the past two seasons, having some good moments, and some not-so-good moments, but has been nothing but loyal to the Cyclones. So, if Campbell and the staff wants to move forward with Park, that’s their prerogative, but they should have the stones to at least tell Lanning. Then, maybe, he can finish his studies in the spring and becomes a graduate transfer who could play quarterback somewhere else in 2017.

What went on Thursday night was a disservice to both quarterbacks. Park was the guy between the 20s, while Lanning became the Tim Tebow-esque player in the red zone, primarily running the ball and throwing just that one pass all night.

The offense became somewhat predictable for the Sooners defense. Also, it was insulting to Lanning who is more than capable of throwing the ball and it did not allow Park to test his big arm in tight spots in the red zone.

Oh, and for the record, Park wasn’t exactly money during his playing time. He did show some promise throwing two touchdown passes, but finished 16-of-29 for 160 yards. When the Cyclones needed Park most, down 10 points with just over 5 minutes left in the 4th quarter nearing mid field, Park threw two horrible passes on 3rd and 8 and 4th and 8.

The Georgia-transfer did take responsibility for those throws, specifically the 4th and 8 pass saying, “I made some good plays, but I didn’t make the one that counted tonight. I should have kept the drive alive, and I didn’t make the throw.”

For all the hype surrounding Park, the four-star QB who was recruited by Alabama, Auburn, Florida State and Notre Dame, before decided on Georgia, he has been very underwhelming at times. You want to call it rust? Fine. But, he has throw 138 passes this season, not 38.

If the staff wants to give Park the reins and see what he’s got, then here’s what Matt Campbell should do: sit down both quarterbacks tomorrow morning. Tell them Jacob Park will play every snap over the final three games of the season against Kansas, Texas Tech and West Virginia. The staff clearly wants to see what they have in Park and just playing him between the 20s doesn’t allow for a full evaluation.

The Cyclones are 1-8 and Campbell is building a program. There’s no need to try and “play to win” these next three games. His recruiting won’t be affected by the results of the next month and he needs to start looking towards 2017.

After the season, Campbell can sit down with both quarterbacks and let them know if he plans on holding a quarterback battle for 2017 or just roll with Park. That would give Lanning plenty of time to decide on what he wants to do next with his playing future.

After the loss on Thursday night, Campbell referred to the quarterback situation, saying, “It’s a weekly deal right now.”

Well, it shouldn’t be. It’s stunting the growth of both players, does not allow for a proper evaluation of Park, and leaves the future of the program pissing in the wind.