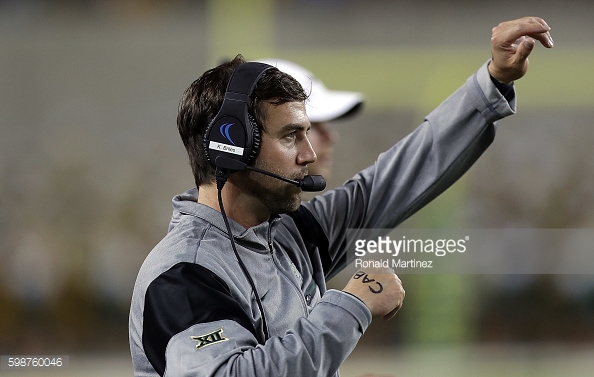 The NCAA announced Wednesday that it has fined Baylor $5,000, but will not issue additional penalties, and accepts Baylor’s self-imposed sanctions for violations involving offensive coordinator Kendal Briles and assistant coaches Tate Wallis and Jeff Lebby.

According to the NCAA release, Briles and Wallis tried to find loophole in the rules that allowed them to see more prospects in the spring.

In one example, the NCAA says a coach tried to use a track meet for recruiting leverage:

During one compliance session, a coach asked if the staff could attend a track meet and turn their backs when the prospect they wanted to be seen by was competing so the coaches could avoid having to log an evaluation for that prospect.

By going to the track meet, this put Baylor over the limit of two evaluations per prospect during the spring recruiting period.

Briles and Wallis were suspended for the 2015 season-opener against Lamar.

Other self-imposed sanctions Baylor handed down to themselves include an eight-week recruiting hiatus for one of the prospects and the elimination of recruiting at track meets.

As for Lebby, he was mentioned in the report for another violation for attending the game of a future opponent. Lebby was suspended for the first half of Baylor’s 2015 game against Oklahoma.

In a statement, athletic director Mack Rhoades said, “This isolated matter involving two assistant football coaches occurred during the spring 2015 recruiting evaluation period, and when notified of this issue in August 2015, Baylor immediately and effectively cooperated with the NCAA. We are grateful the NCAA Committee on Infractions accepted our original self-imposed penalties from September 2015. Baylor University accepts this outcome.”

Meantime, the NCAA’s Greg Christopher said, “It is disappointing that the university’s coaching staff was more interested in finding loopholes to exploit the rules instead of trying to follow the rules. The assistant coaches could have easily avoided these violations if their focus had been following the rules rather than finding ways around them.”

New Baylor coach Matt Rhule has not said if he will retain any Briles, Wallis, Lebby or any of the other assistants currently employed by the university. But, let’s be honest, the odds of that happening are the same odds of Kansas going undefeated next fall.