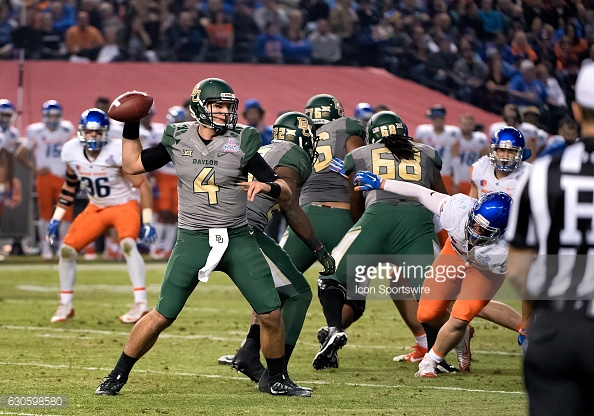 Baylor ended a rocky 2016 season with a 31-12 win over Boise State in the Cactus Bowl, as head coach Jim Grobe will step down, and Matt Rhule will officially take over the program.

Let’s turn the clocks back to last spring. Who ever saw this coming? Art Briles had the Baylor Bears humming, ripping off three straight seasons of double-digit wins, which included two Big 12 Championships. But, within months, Briles was fired, along with his AD and President, recruits fled, and Jim Grobe was suddenly in charge of trying to right the rapidly sinking ship, but only on an interim basis.

One thing that was confirmed during this trying season in Waco was that Jim Grobe is a damn good man. While I felt great for the players, that feeling was just as strong, if not stronger, for Grobe, who said after the game Cactus Bowl victory, “”It’s going to be a win that stays with me for a long, long time. What an honor it’s been for me.”

For some, it’s easy to forget that 99% of the kids in the Baylor football program the past several years were and are quality young men. They deserved Tuesday night’s Cactus Bowl win. KD Cannon had an outstanding night with 14 catches for Cactus Bowl record 226 yards and two touchdowns. Matt Rhule was in the stands for the game is was likely already writing up his pitch on how to get Cannon to return in 2017.

Sophomore running back Terence Williams racked up over 100 yards on the ground and is likely to lead the way in the backfield next fall, helping calm concerns about how the team fills the open spot left by Shock Linwood.

But, it was freshman quarterback Zach Smith who gave Bears fans the most to smile about tonight. Following the season-ending injury to Seth Russell, Smith had up (Texas Tech) and down (Kansas State, West Virginia) results during his initial taste of FBS football.

Smith smoked Boise State, completing 28 of 39 passes for 375 yards and 3 touchdowns. There is no position like the quarterback that can change the attitudes, expectations, and feelings of a fan base. Similar to Mason Rudolph winning Bedlam his freshman year, which gave the Cowboys a boost heading into the offseason, Smith just did that for the Bears.

Baylor fans now feel like they have their quarterback under Matt Rhule going into 2017. Just ask Texas, having “your quarterback” is not as easy as it sounds. In hindsight, if 2016 was going to be a lost season anyway, then maybe Russell’s injury was a slight blessing in disguise, as it gave Smith time to get some reps and gain some confidence heading into next season.

But, before we keep getting ahead of ourselves, let’s get back to Tuesday night: there were smiles on the field, high fives on the sidelines, and a ton of pent up energy in the postgame locker room celebration, as the Bears had not won a game in nearly two a half months (Kansas on October 15th).

The Cactus Bowl win snapped a 6-game losing streak for the Bears. Did some of the off-field stories and rumors flying around during the season bother this team? It did. Then again, how could it not affect most 19 and 20-year-olds? It’s human nature.

New Baylor head coach Matt Rhule joined Rece Davis, David Pollack and Joey Galloway in the booth for some of the game and reminded Bears fans of what a professional and class act they are getting. There’s no doubt about it.

Bowl season can be a great launching point for a program or it can send a team into a long offseason where they look for answers to questions that may not be as severe or as serious as they appear to be, based on a single bowl game. Alas, that’s today’s world of 24/7 sports media cycle and overreaction, for better or for worse.

On the flip side, the winning team in a bowl game may go into the offseason with rose colored glasses. For all the good we mentioned for the Bears, there are still issues, such as the previously mentioned depleted 2016 recruiting class, while the 2017 recruiting class currently has just one commitment.

But, for one night, Baylor fans were given a well-deserved breath of fresh air, where the dominant and only topic was the pigskin.

After the game, Jim Grobe said, “That was fun… I love these guys. It’s been an honor for me… Some of the best kids I’ve ever been around.”

For all the hits Baylor has taken the past several months, both on and off the field, tonight was a reminder that the young men who were on the field in Phoenix were, and for those returning, should continue to be, easy to root for heading into 2017.