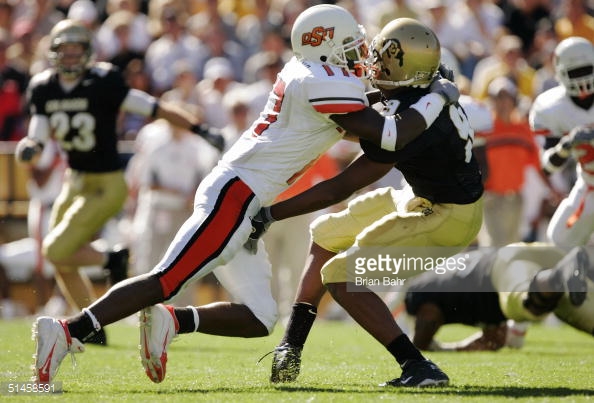 There is no better way to light up the Alamo City than a football match up between two old Big 12 conference foes: Colorado faces Oklahoma State and below you’ll find our preview of the 2016 Alamo Bowl.

Colorado was once a Big 12 school before jumping ship to the Pac 12. Coming off their best season in recent years, the Buffaloes will face a tough Mullet wearing, Mike Gundy coached football team. Although both teams are happy with their overall records, they certainly are disappointed with their last performance. Both schools had an opportunity to win their conference but fell short.

For a coach that was once in a hole, Colorado Head Coach Mike MacIntyre has dug his way out and then some. There were talks before the season about him losing his job if he didn’t get things turned around in 2016. After a combined 10 wins in the past three seasons, the Buffaloes have turned the corner winning 10 games in 2016 alone. From nearly losing his job to Pac 12 coach of the year, Mike MacIntyre has his team rolling.

It is not often that Oklahoma State football fans are disappointed with a 9 win regular season but head coach Mike Gundy has done just that. The fan base knew what this team was capable of and after a questionable coaching performance in Bedlam, fans are a bit sour. I can understand fans being upset but some need to realize just where this program has come from. There is that old saying “Never question the hand that feeds you” and I think that is perfect for a time like this in Stillwater. Be careful what you wish for Cowboy fans.

Leading the way for the Cowboys offense is quarterback Mason Rudolph. Rudolph is averaging an astounding 314.7 passing yards per game along with tossing 25 touchdowns on 4 picks. Yes, I said only 4 interceptions! Entering the bowl game he is completing 62.4 % of his passes which is not bad at all. Mason has really improved on taking care of the football compared to last season. With that said, he does leave some easy throws left on the field as he is sporadic with his passes at times.

If there was a character that you had to name “terminator” on the football field it would be 1st team All-Big 12 WR James Washington. Washington comes in averaging 100.7 yards per games and has found the end zone 9 times this season. This guy can make difficult catches look routine and if you see the back of his jersey he is likely going to score. Joining him will be Mason’s second favorite target Jalen McCleskey who has really stepped up in 2016. Jalen averages 63.5 yards per game and has reeled in 7 touchdown passes so far. Rounding out the group is Jhajuan Seales who averages 47.67 yards per game along with scoring 3 times himself.

On defense Colorado will run a 3-4 scheme. There are 8 senior defensive starters for this unit and they really can give some offenses fits. Up front the Buffaloes will roll out with DE Jordan Carell, NT Josh Tupou and DE Samson Kafovalu. Jordan Carell Is the best defensive lineman on the squad with 5.5 sacks in a 3 man front. NT Josh Tupou is mostly used a space eater to free up linebackers while DE Samson Kafovalu has 2.5 sacks of his own.

Leading the way at linebacker is 1st team All-Pac 12 OLB Jimmie Gilbert. Gilbert has 10.5 sacks this season and is the best pass rusher for Colorado. Anytime an offense drops back to pass, Gilbert is the man to watch rushing the quarterback. Next to him is inside linebackers Kenneth Olugbode and Rick Gamboa. Olugbode leads the team in tackles and has 2 picks while Gamboa is 2nd in tackles with 4 pass breakups. Rounding out the group is N.J. Falo who is filling in. This linebacker group can do a little bit of everything both in pass coverage and run support.

At corner the Buffaloes will use starters Chidobe Awuzie (2nd team All-Pac 12) and Ahkello Witherspoon. Awuzie has 1 takeaway, 4 sacks and 13 PBUs while Witherspoon has 1 interception so far. Joining them will be FS Afolabi Laguda and SS Tedric Thompson. The man who will be all over the back end and covering ground is 2nd team All-Pac 12 SS Tedric Thompson. He has 7 interceptions with 18 PBUs and has been a ball hawk all season long.

While most may think that Oklahoma State is a pure passing team, that hasn’t been the case in 2016. The Cowboys have brought a balanced attack in almost every game they have played this season and I expect the Alamo Bowl to be no different. Will Mason Rudolph still sling the ball around to Washington and McCleskey? Absolutely, but running backs Justice Hill and Chris Carson should see plenty of action on Thursday. For Colorado, they have been excellent against the passing attack all season long with the exception of the USC game. With a stingy secondary and a good wide receiver group for OSU, these two factors could wash each other out. That means this matchup will come down to the running game. Colorado has struggled at times stopping a good rushing attack so I expect the Cowboys to take advantage of that.

Leading the herd for the Buffaloes is senior quarterback Sefo Liufau. Liufau is averaging 197.3 passing yards per contest while tossing 11 touchdowns and 6 interceptions. He also is completing 62.8% of his passes. While he may not be the best passer in the world, Liufau does a lot of his damage on the ground. He is very athletic and can cause some mismatches. Sefo is the second leading rusher for his team averaging 45.1 yards and running in 7 scores.

If there is only one name to remember on this Colorado offense it is 2nd team All-Pac 12 RB Phillip Lindsay. Lindsay is averaging 91.5 yards per game and has hit pay dirt 16 times this season! Averaging 5.1 yards per carry, Lindsay is a tough, physical runner for his size. When you watch the guy play you can see his vision is on another level in the open field. I can’t say enough positive things about Phillip Lindsay.

Even though Colorado won’t sling the ball around a ton they still have some nice weapons at wide receiver. Shay Fields is the deep threat in the passing game averaging 16.3 yards per catch and reeling in 9 touchdowns. Joining him will be receivers Devin Ross and Brice Bobo who are both known for their aggressive play. Ross and Bobo are averaging a combined 104.1 yards per game.

1st team All-Big 12 selection Vincent Taylor is the disruptive force at his DT position. Taylor has been terrorizing offenses all season long with 6 sacks, 12 TFLs and 2 forced fumble. Also in the middle with Taylor will be DT Montekai Maile who has 2.5 sacks and 6 TFLs. The edge guys at DE will be Cole Walterscheid and Jarell Owens who combine for 2.5 sacks and 10 TFLs. This is a very physical defensive line lead by DT Vincent Taylor.

The corner spots will be locked down by Ramon Richards and Ashton Lampkin. Richards has 3 interceptions while Lampkin had just 3 PBUs. Depending on the day, CB Ramon Richards can be hot or cold on the field. Also Lenzy Pipkins will handle the NB position when needed. Holding down the fort at SS is Tre Flowers who has 6 PBUs and 2 forced fumbles. I saved the best for last in 1st team All-Big 12 selction Jordan Sterns. At FS, Sterns has 5 TFLs and 3 picks. He also leads the defense in total tackles.

Colorado loves to pass the football to set up the running game. They will throw a ton of screens and vertical routes to stretch the defense to set up the run game up the gut. While QB Sefo Liufau isn’t the greatest passer in the world, he does have the ability to connect with his receivers to hit a few over the top. Liufau’s legs will be something to keep an eye on throughout the game. With all this being said, RB Phillip Lindsay is the heartbeat of this offense. Lindsay is the type of back that will do anything to help his team win. I expect a heavy dose of Lindsay and QB Sefo Liufau running the pigskin. Colorado will take their chances deep as well.

For Oklahoma State they are giving up over 200 yards on the ground per game which is surprising. This does not sit well with me against a run heavy Colorado offense. I will say that the OSU secondary should be able to keep the Colorado receivers in check so they can really key in on the run game. All eyes for this defense need to be on RB Phillip Lindsay and to spy QB Sefo Liufau.

Colorado wins if they are able to run the football. This offense does not want this game to be put on the shoulders of QB Sefo Liufau. Defensively they need to shut down the OSU running game.

Oklahoma State wins if they are able to be balanced on offense as well as spreading the ball around. Colorado will likely focus on WR James Washington, so it will be important that RB Justice Hill and WR Jalen McCleskey are involved in the game plan.