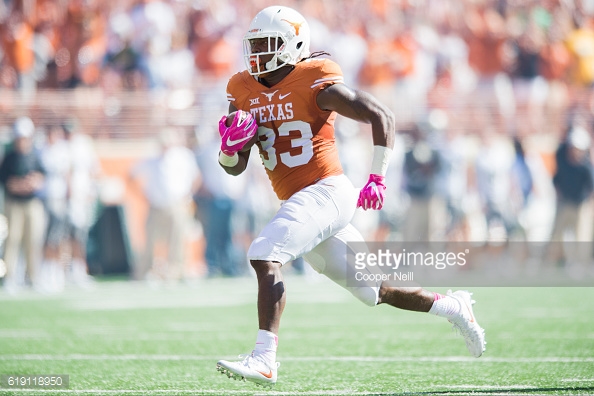 Former Texas Longhorns running back D’Onta Foreman told NFL Network on Monday that he played through the pain of losing his infant son last season.

Foreman said his son, D’Onta Jr., was born prematurely in September and died seven weeks later on Nov. 5 due to an intestinal infection.

If you recall, that was the weekend Foreman rushed for 341 yards and three touchdowns leading Texas to a 45-37 win in Lubbock against Texas Tech.

In his interview, Foreman told NFL Network, “I really didn’t know how to feel. I was like numb. I felt like something was taken away from me before I had a chance to experience it.”

“It was just something about that game, it was like, ‘I’m doing it for my son. I’m leaving it all out here,'” Foreman said.

Foreman had a breakout 2016 season in Austin, helping carry a young offense that was being led by true freshman Shane Buechele at quarterback. D’Onta Foreman led the nation in with 2,028 yards rushing yards during his junior season with the Longhorns. He went on to win the Doak Walker Award, honoring the nation’s top running back and was named an AP first-team All-American.

In a fascinating coincidence, Foreman and his girlfriend are expecting a child on Sept. 16, which is the one-year anniversary of D’Onta Jr.’s birth.

Foreman will be selected in this weekend’s NFL Draft, with most projections listing him as a second or third rounder. He’s a big, physical runner at 6′, 233 pounds, and has great athleticism for his size. Some scouts say he prefers to try to finesse runs instead of using his God-given power, but there’s no doubt that he will be a quality player in the NFL.