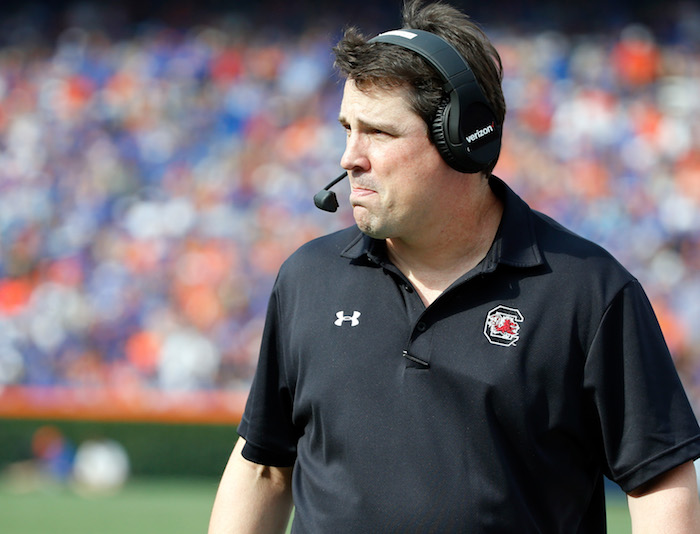 Along with several longtime college football fans, a former Big 12 participant would love to see the Texas vs. Texas A&M rivalry renewed. Will Muschamp spoke with the media on Tuesday during the SEC spring meetings, and the former Texas Longhorns defensive coordinator admitted he’d like to see Texas and Texas A&M renew their rivalry.

“I think that A&M and Texas should play, personally,” Muschamp said. “I think that’s a great college football game that we’ve gotten away from because of conference changes and things that have happened. That’s a great game. Having been a part of it, it’s a wonderful game.”

Muschamp was not asked specifically about this question, instead it was in reference to being asked about his current team, South Carolina, being scheduled to play A&M every season.

There are plenty of intra-con rivalries that take place yearly throughout the season, including Muschamp’s Gamecocks, who play the Clemson Tigers each season. Then there’s also Florida – Florida State.

So why not Texas and Texas A&M back on Thanksgiving? It’d be great for the fans and the state. My 2 cents: I believe A&M wants no part of playing this game anymore. They get to brag about being in, what they believe it, the best football conference in America. This allows them to justify their yearly mediocrity.

But Will Muschamp went on to shoot it straight, saying, “It’d be great for the state of Texas. It was always a great game, whether it was on Thanksgiving or the Saturday after that.”

Muschamp was the defensive coordinator at Texas from 2008 to 2010. Let’s also add that it is fair to wonder whether or not the South Carolina coach just wants to avoid the Aggies, since A&M has beaten the Gamecocks in three straight seasons.

But that’s neither here, nor there.

So what would it take to get Texas vs. Texas A&M back to being a yearly Thanksgiving tradition?