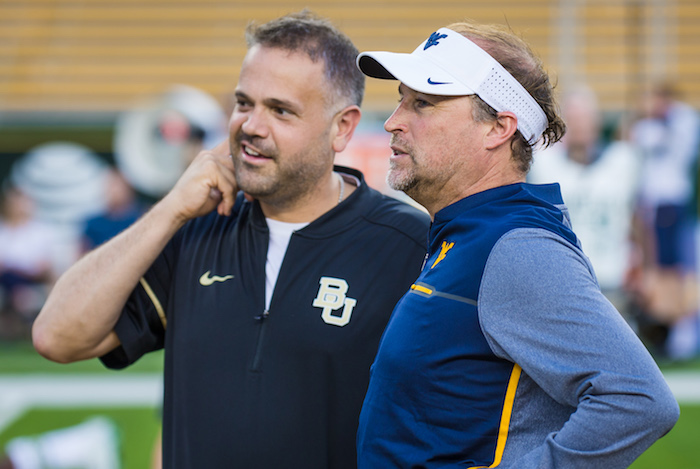 Was there even a doubt? The Horned Frogs are playing some of the best football in the country as they absolutely embarrassed the Jayhawks, holding them to 21 total yards of offense, which includes -25 yards rushing. This team is different than the 2014 Trevone Boykin team, as it isn’t a true Air Raid, but I think it’s better. The defense is unbelievable, there’s veteran leadership, and it’s a poised group. But look around college football and see how messy the College Football Playoff scenario could get, it will make your head spin. When you factor in all the blue bloods having great seasons, TCU needs to just win, win win.

This #2 position was up for grabs in this week’s Power Rankings. We have five voters, and there were four Big 12 teams selected in the #2 spot (OU, OSU, ISU, WVU). That tells you how deep this conference runs. But it also shows you that those teams 2-5 have not shown the consistency needed to grab hold onto the second spot in the Power Rankings. The Sooners continue to make things harder than they need to be. Whether it was Baylor, Iowa State, Texas or Kansas State, OU has struggled at various parts of the game for long stretches. And they haven’t even played the other teams in the top 4 of our power rankings yet.

A win’s a win, right? I guess, but it sure was ugly on Saturday in Austin. Mike Gundy says it was one of the best defensive efforts he’s seen during his time at Oklahoma State. Maybe so, but an assist should go to Tim Beck and Tom Herman. Oklahoma State’s offensive line issues are going to continue to plague this team moving forward and Mason Rudolph is going to have to adjust properly for them to get through the next couple of weeks against West Virginia and Oklahoma.

Ah, the Mountaineers. They nearly handed the Baylor homecoming crowd a gift for the ages on Saturday night. This Mountaineers team remains an enigma that is unable to put teams away, or gets off to slow starts. It’s a very talented offense, with a defense that lacks last season’s punch. This team is tied for forcing the second fewest turnovers in conference play with four through four games. Last season’s team that won 10 games finished with 19 turnovers through nine games, which was tied for the most in the Big 12 with the Texas Longhorns.

Yes, the Cyclones did receive a vote for #2 in this week’s Power Rankings, but they settle for the number 5 spot. However, they do continue to rise, along with Matt Campbell’s national profile. The Cyclones have forced the most turnovers in the Big 12, have not lost a fumble, and are the least penalized team in the conference. It’s also as likable a team as their is in the Big 12, heck the country, right now. How can you not root for these guys? (Unless your team is about to play them). Also, who in July predicted Iowa State vs. TCU as the must-watch game in the Big 12 on October 28th? Not me. I’m not afraid to admit it.

This Longhorns team is living off of moral victories, which aren’t supposed to exist in Austin. The defense has been outstanding since the Maryland debacle, but the offense remains a work in progress, at best. Now Sam Ehlinger’s status is up in the air for this week’s game against Baylor, which is must-win if the Longhorns want to make a bowl game. And it is really, truly, honestly shocking that Ehlinger is banged up after averaging 19 carries over the past four games (behind a suspect offensive line). I mean who would’ve thought, right?

Kansas State showed grit that we haven’t seen from this team yet this season, but they still blew an 11-point halftime lead to lose to the Sooners 42-35, while giving up over 400 passing yards and 600 total yards. The Wildcats have lost four of their past five games and outside of Kansas this week, there is not a game left that Kansas State will be favored in. Also, how sustainable is the game plan the Wildcats used on Saturday? Alex Delton carried the ball 27 times for an impressive 142 yards. But at 6′, 200 pounds, can his body take that kind of a beating every week?

Yikes. Life has come at the Red Raiders quickly. Since halftime of the West Virginia game, the Red Raiders have been outscored 60-20. Not good. The worst part is that it’s not entirely the defenses fault, who still picked off Iowa State QB Kyle Kempt on Saturday to lead to early points. But the offense is lagging behind. The Red Raiders continue to try to establish the running game, with 41 carries on Saturday, however they only averaged 3.1 yards per carry. Tre King was a bright spot (4.1 YPC), but Desmond Nisby and Justin Stockton could never get it going. Nic Shimonek looked very pedestrian with 207 passing yards, zero touchdowns and one interception. If the offense starts having some troubles, this could get ugly fast.

How about an 0-7 team holding it’s own in the 9 spot week in, week out? Baylor put up a homecoming fight this weekend against West Virginia and seemed to have identify their quarterback of the future in Charlie Brewer. Brewer completed 8 of 13 passes for 109 yards and two touchdown passes in relief for Zach Smith. The Bears outscored the Mountaineers 23-0 in the fourth quarter. After the game, Matt Rhule said,“Charlie showed he had moxie tonight.” That’s exactly what this Bears team needs, a little moxie. While the Bears covered the spread which kept me from a 5-0 weekend in my Big 12 picks, it gives Bears fans continued reason to believe in Rhule as they “trust the process” in Waco (as they should).

The Jayhawks continue to get worse every week, which honestly seems nearly impossible. KU had 21 total yards of offense, -25 rushing yards, and then there was a running clock late in the game. A RUNNING CLOCK BETWEEN TWO FBS TEAMS IN THE SAME CONFERENCE?! Garbage. I wrote last month that David Beaty shouldn’t be on the hot seat, but based on how awful this team has been in Year 3, I may soon have to change my tune. Plus, there is now a movement to fire their athletic director. It’s starting to get ugly in Lawrence.