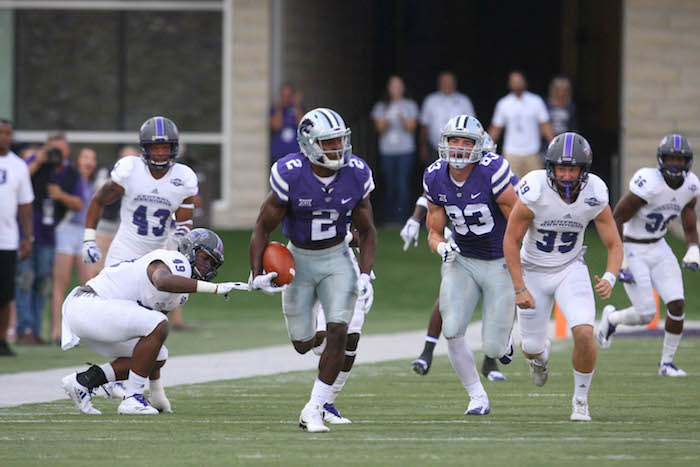 It was really fun to talk with former Kansas State Wildcats cornerback D.J. Reed, who is preparing in California for the 2018 NFL Draft. We talked with Reed about what his decision to declare for the draft came down to, how he chose Vayner Sports, how long he thinks Bill Snyder will coach, plus who was the toughest wide receiver he faced in college. Enjoy!

On why he chose to skip his senior season (2:10): “My main goal has always been to take care of my family and I have the opportunity to do that. My mom’s bene working for 35+ years, you know just to take teh burden off her back would mean the world to me… as well as, I had two great seasons in the Big 12, first team All-Big 12 my two years, and I just felt that it was time.”

On choosing VaynerSports (4:00): “It was very interesting. Gary [Vaynerchuk], he’s just an amazing guy. When you actually sit down and talk with him, he’s just full of ideas. He gets what he wants, he knows what he wants to do, he’s very confident. He basically told me his agency is obviously new, which could be worrisome, but I just wanted to be different. I was actually going to sign with a different agency, but Gary and VaynerSports just felt right. It’s kinda cliche they say “trust your gut feeling”, and that’s what my gut was telling me and my mom wanted to do that.”

On Matthew Snyder (6:00): “No words can really do that justice… you can just give your condolences… I’ve obviously been praying for him and I shot him a text to let him know I’m here for him and I basically told him no words can give this justice but I’m praying for you and your family.”

On how long Bill Snyder will coach (6:50): “Until he dies…! His motor never stops. He was battling throat cancer and a lot of guys didn’t know if he would come back. He preaches toughness but you gotta give it to him, he lived it as well, I witnessed it, throat cancer is no joke… his level of toughness is just different from a lot of people.”

On how Sean Snyder took over when Bill was sick (8:00): “When he wasn’t there, Sean did step up and take over his role.”

Toughest part of this season (9:30): “The toughest part was probably, two things, losing to Vanderbilt … the other loss was a wake up call, losing to West Virginia.”