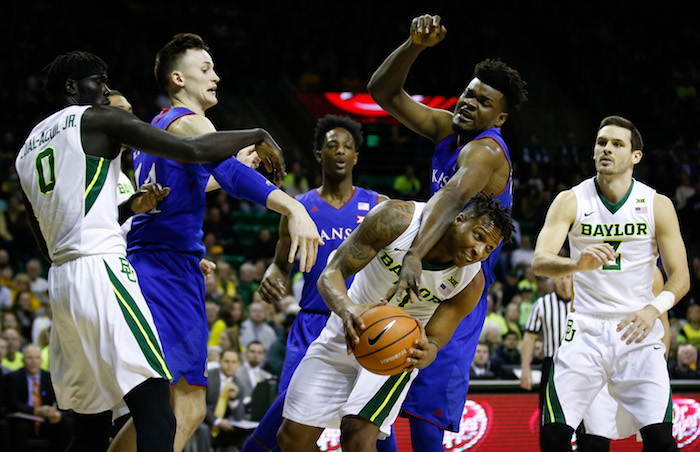 While the rest of the Big 12 conference is in total chaos, the Red Raiders, as Al Davis famously coined, “Just win, Baby!” Texas Tech is riding a six-game winning streak and has dominated their last three opponents, beating TCU, Iowa State and Kansas State by double digits. Tech held K-State to under 30% shooting on Saturday, continuing their stretch of impressive defense. The Red Raiders are allowing 62 points per game, the fewest in the Big 12 by over five points per game. Tech hosts a desperate OU team this week and goes on the road to Baylor, one of the hottest teams in the conference.

The Jayhawks are vulnerable. They’ve lost two of their last three games and Saturday’s loss to Baylor was an ugly one where KU had just 20 points at halftime, including more turnovers (9) than field goals (7). Kansas’ defense remains an issue at times, they’re 6th in the Big 12 in scoring defense and have allowed at least 80 points in each of their four conference losses. KU is now one game back of TTU in the Big 12 standings (with the Red Raiders holding the tie breaker). Kansas’ streak of 13-straight Big 12 titles is in serious jeopardy.

This is where it starts getting interesting. WVU had its two-game winning streak snapped Saturday by a rapidly improving Oklahoma State team. Overall, the Mountaineers have lost six of nine games, but due to the chaos across the rest of the conference, they’ve held on (barely) to the number three spot in this week’s Power Rankings. Now the Mountaineers have to play a TCU team on Monday night that they’ve already lost to earlier in the season, then go on the road to Lawrence on Saturday, a place they’ve never won. Godspeed.

Would you have guessed the Baylor Bears have the second-longest winning streak in the Big 12 conference? Three in a row for the Bears after their stunning win over Kansas in Waco on Saturday. The defense has improved drastically over the last couple of weeks. Prior to this three game winning streak, Baylor had lost four in a row. In their last three losses, Baylor allowed at least 81 points in each game. Well during the winning streak, the Bears’ defense has locked down, not giving up more than 67 points in any of the wins. We’ll see if BU can keep it going this week at Texas and home to Texas Tech on Saturday.

The further down these Power Rankings we go, the hotter the debates get. Teams four through eight were decided by 2 points or less in our voting. Kansas State has lost three of four games, and the three losses haven’t been close, including Saturday’s 19-point defeat by Texas Tech. K-State’s road win at Texas mid-week was much needed and a good one, but the Wildcats sometimes can’t get out of their own way, especially in the rebounding department. Also, the Wildcats are third in the Big 12 with a +1.8 turnover margin. Saturday against Tech, the Wildcats were -6. This week K-State plays at a streaking OSU team and home against Iowa State.

With their win over the Mountaineers on Saturday, Oklahoma State become only the second team to beat Kansas and West Virginia on the road in the same season since WVU joined the Big 12 conference. The first? Oklahoma State in 2013, but that year the Mountaineers struggled to a 13-19 finish. Kendall Smith and Cameron McGriff each scored 20 points in Saturday’s win. Both players have come on strong lately, as McGriff also scored 20 in the win over KU last week. OSU hosts K-State mid week before going to TCU on Saturday.

The Horned Frogs continue to, more or less, alternate wins throughout Big 12 play. After losses to Texas Tech and Kansas, TCU bounced back with a 16-point win on Saturday against Texas. In the battle between NCAA Tournament hopefuls, it was TCU’s largest margin of victory over the Longhorns since 1987. Kouat Noi had his second-straight career high with 18 points. Head coach Jamie Dixon said it best in the post game, “There’s nothing like this league.” A truer statement has never been spoken! TCU goes to WVU this week, followed by a home game against Oklahoma State.

The Sooners’ free fall continues. OU has lost six of its past eight games, including three in a row after falling 88-80 to Iowa State on Saturday. Also, Oklahoma has lost six-straight road games and their last win away from Norman came in 2017. As we wrote on Sunday, this is an incredibly troubling time for this team, which has a Player of the Year candidate in Trae Young, but it’s not resulting in wins of late. OU’s defense remains the biggest problem. The Sooners are allowing 85 points per game in Big 12 play, the worst by nearly four points per game. And if you’re having road troubles, going to Lubbock probably isn’t going to be easy, which OU has to do this week. But considering how the Big 12 has played out thus far, OU probably will win this game by 25.

Texas has tumbled a bit over the past week, which included a pair of losses to K-State and then an ugly 16-point defeat against TCU on Saturday. The Longhorns have lost three of four games overall and might have some work to do to get themselves comfortably into the NCAA Tournament. For all its length, UT has struggled on the boards, getting out rebounding 33-22 on Saturday by the Horned Frogs. For the season, Texas is -1.2 in rebounding margin and their assist/turnover ratio is the worst in the Big 12. Texas has to take care of business this week at home against Baylor and then try to beat a struggling OU team in Norman on Saturday.

Iowa State’s last three wins are over Oklahoma, West Virginia and Texas Tech. How do ya like them apples?? Granted, they’re all at home, but Hilton is a tough place to play, and even in a down year the Cyclones are making sure that still rings true. Lindell Wigginton keeps improving by the day, as he scored 26 points against OU, which followed his 22-point output in last week’s upset of the Mountaineers. But for all their recent improvement, Iowa State is still 0-7 on the road this season. Iowa State gets the Kansas schools this week, with the Jayhawks at home, followed by a trip to Manhattan.