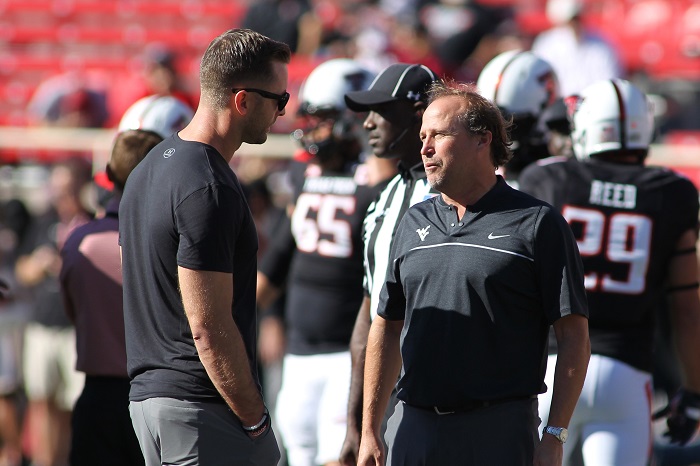 When the college football schedules come out, the biggest question is not “who?”, but “when?”. See the Big 12 Conference plays a round robin schedule (yes, the toughest way to play a conference schedule), so every year, Big 12 fans know who their home games will be against and who their road games will be against, because they rotate home and away each season. But when factoring in non-conference games and their locations, this can help make or break a schedule for certain fan bases. So with just three weeks left until the first Saturday of the college football season, let’s rank the schedules based on which fan bases will be most happy with their home slate.

The Red Raiders fans will have a very enjoyable home slate this season.  Granted, they only get five home games due to two neutral sites, but what they have in Lubbock makes up for it “bigly”. They get both Oklahoma and Texas at home, which no other team in the conference can say. When you get both conference blue bloods on your home turf, that’s worth something. Plus the West Virginia Mountaineers come to Lubbock, making that three teams that could be competing for a Big 12 Championship by season’s end. Also, there’s a very solid non-conference game against the Houston Cougars. Sure, they have KU as well, but at least it’s a likely “W”, which no fan will be upset about seeing, especially given the fact that it may be a rough year for TTU.

There’s a premier non-conference game against the USC Trojans, then two in-state rivals in TCU and Baylor, followed by a visit from Will Grier and the Mountaineers, along with a gritty Iowa State team, a game that could be a battle between the top two defenses in the conference. Heck, even the Tulsa game has some intrigue with Phil Montgomery coming to town.

Unlike many teams today, the Sooners play tough non-conference games, but never at neutral sites, which is great for the fans. This year’s it’s Chip Kelly and UCLA. Also let’s not forget about Lane Kiffin (!!!) coming to town and it’s a very interesting Army squad. The Sooners also get Bedlam in Norman this season, plus Bill Snyder and the Wildcats, who have given OU some trouble at home in recent seasons (I was at the 2012 upset, which remains a very vivid memory of pissed off OU fans). Baylor has a chance to be intriguing the week before the Texas game and Kansas is … Kansas.

Speaking of sneaky good non-conference games, Oklahoma State has one of those. The Pokes play the Broncos in Week 3 as part of a four-week stretch that includes three home games, the other two being Texas Tech and Iowa State. Then the back end of the season, Oklahoma State hosts both Texas and West Virginia, two teams that could be vying for a spot in the Big 12 Championship Game. This is a solid one for Mike Gundy. Bumping OSU up this list as well is the fact that they have no neutral site games, giving them seven home games, and four in a row to start the season. Let the tailgates begin!

Also, seven home games for Cyclones fans?! I hope there’s enough Busch Light in Ames for all these Saturdays. The Iowa game is on the road this year, but that doesn’t change a very solid slate of games at Jack Trice. Oklahoma in Week 3 is can’t-miss football, especially after last season’s outcome, then it’s Will Grier and the Mountaineers coming to town. Farmageddon is also at home this year, which is always a hard fought game, while Texas Tech and Baylor have potential. Plus, Iowa State fans don’t have to play KU at home. There’s a lot to like about this schedule.

If only the Ohio State game was a home and home, then TCU would fly up the rankings. Still, it’s nothing to scoff at for Horned Frogs fans, with Iowa State and Texas Tech early in the season, then both Oklahoma schools, plus Kansas State. Those are a ton of interesting match ups and we will learn early in the season if this is a reload or rebuild for Gary Patterson.

The Mountaineers have a really good non-conference, but unfortunately, neither of the games are in Morgantown. Tennessee is in Charlotte and N.C. State is on the road. Oh well. Still, the Oklahoma match up in the final week of the season has huge potential written all over it. K-State has historically been a very close game between these teams, and then there’s Baylor and TCU as well.

Anytime a Big 12 school can get an SEC school on its home turf, that’s a win in the scheduling column. And if you didn’t hear, K-State vs. Mississippi State will be the home for our first HCS tailgate of the 2018 season! The Texas game early in the season will be a telltale sign for both fan bases as to what realistic expectations should be for each program. Oklahoma State is not going to be the team it was the past three seasons, and then it wraps up with possibly the two worst teams in the Big 12. So after a strong start, the schedule peters out a bit for K-State.

There’s a decent non-conference game against Duke, but Baylor doesn’t get OU or Texas in Waco this season, but does have to play Kansas at home. That’s a double-whammy of disappointing news for the fan base. Also, they won’t welcome in a potential Heisman-candidate in Will Grier. It’s not a great home slate, but at this point Baylor fans just want to rack up some wins and start to see this program turn the corner.

Can Pat Mahomes Represent the Big 12 in the NFL?
For Iowa State QB Kyle Kempt, It’s the NFL … or Computer Science
To Top