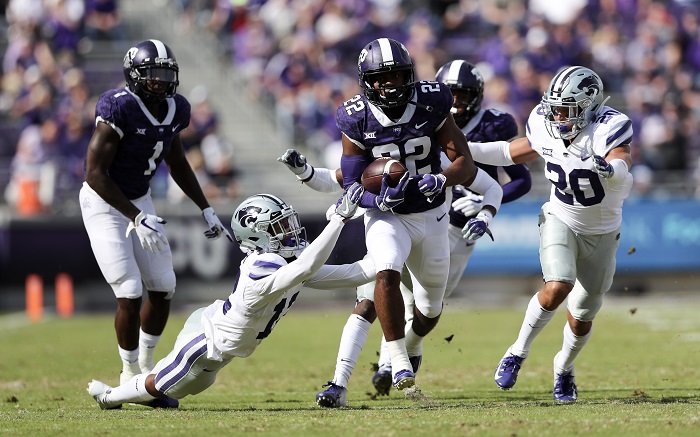 On paper, this was far from a sexy match up, as it featured two of the bottom feeders in the Big 12 Conference this season. Frankly, it was probably tough for some folks in Manhattan and Fort Worth to get juiced up for this game. Alas, it was a competitive match up that made it worth everyone’s time.

After going three and out to start the game, the Horned Frogs got a miraculous gift from Kansas State thanks to an Isaiah Zuber fumble on the punt return. Four plays later, running back Darius Anderson took it in for a score to give the Frogs an early 7-0 lead. After trading punts, Kansas State’s offense led by quarterback Alex Delton got on the scoreboard after a very long ten-play drive that resulted in a 21-yard touchdown pass from Delton to Malik Knowles to tie it all up at seven.

After the Kansas State touchdown with 4:05 left in the first quarter, we saw eight combined possessions that resulted in zero points as the first half finished with the score still 7-7. After soaking up the first half I admittedly thought to myself, “This is exactly what watching a Big Ten game feels like.” Turns out, I was right.

It was also silent in the third quarter and then suddenly, TCU quarterback Michael Collins chunked the ball downfield and found wide out Jalen Reagor for a 67-yard touchdown pass to give the Horned Frogs some life on offense. The two teams once again traded punts before Kansas State put together another long drive. The Wildcats got the ball all the way to the TCU 1-yard line with about ten minutes left in the game and finally on fourth and goal, Alex Delton was able to sneak it in for the score. However, the game wouldn’t end up tied as Wildcat kicker Blake Lynch hooked the extra point to the left. Then TCU was able to run some clock off and made a great defensive stop to end any hopes of a Kansas State victory in Fort Worth. The Horned Frogs ended up with the hard fought 14-13 win over the Wildcats.

The Horned Frogs avoided the first four-game losing streak in 18 seasons under coach Gary Patterson, and improved their chances of becoming bowl eligible for the 16th time on his watch. TCU is now 4-5 on the season, while Kansas State falls to 3-6 and must win out if they want to see a bowl game.