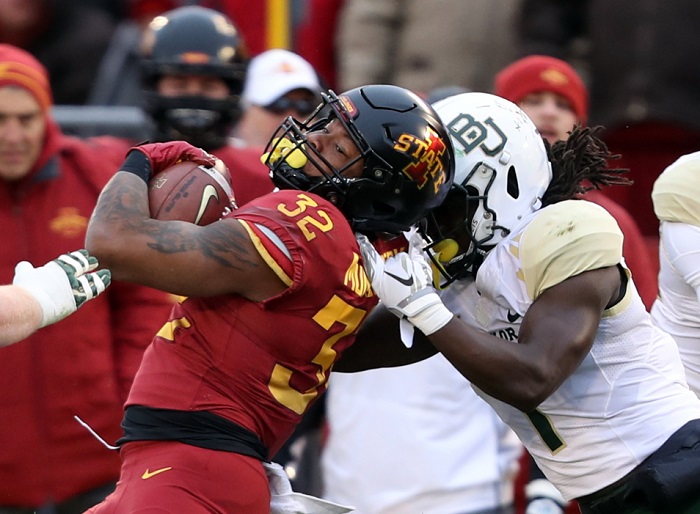 In a frigid Ames, Iowa, the atmosphere was lit in the third quarter when David Montgomery was forced out of bounds and received an extra push into the water cooler on the Iowa State sidelines. A scuffle ensued, but it was the following play where things turned ugly. Montgomery got into it with Baylor defensive end Greg Roberts and both players ended up getting ejected after turning a football game into a boxing match.

While there was some tension throughout the rest of the game, that would be the most contentious moment of the afternoon as Iowa State ultimately won its fifth-straight game in a 28-14 victory over the Bears. It’s the longest conference winning streak for the Cyclones. Ever.

A boxing match broke out in Ames?!?! pic.twitter.com/bEBO7TVZQk

Iowa State’s defense became more of a bend-but-don’t-break unit on Saturday, allowing Baylor to pile up over 500 yards of total offense. But when it mattered most, ISU got the job done, shutting out Baylor on five of seven trips into the red zone. Meantime, Brock Purdy continues to be the toast of the town in Ames, finishing 18 of 23 for 230 passing yards with a touchdown, along with 12 carries for 56 yards and a rushing touchdown. The Cyclones got on the board in the first quarter on an 11-yard hook up between Purdy and DeShaunte Jones. The Cyclones’ second score of the game came in the second on Purdy’s two-yard touchdown run. Iowa State rolled into halftime with a 17-0 lead and the Bears could not fight their way back.

Baylor had to turn to Jalan McClendon at quarterback after Charlie Brewer was ejected for his second unsportsmanlike penalty with 5:51 left. McClendon struggled, going 3 of 12 for 71 yards. Brewer’s night finished 26 of 36 for 288 yards and two touchdowns.

But after the game, the story was still about the fight(s), specifically the one that ended with Montgomery’s ejection. The running back responded on Twitter and apologized, kind of.

First I would like to apologize to cyclone nation and my team for my actions, Me as a captain should have not reacted the way I did and I sincerely apologize for that!!! But I will defend my brothers no matter what and i stand on that!

Montgomery’s head coach, Matt Campbell, defended his player after the win, saying, “David is a leader, so the last thing that I would say that David Montgomery had anything to do with was starting any controversy. It certainly looked like it was a secondary action.”

Campbell is already politicking, as the Big 12 will review the incident, and Montgomery could be suspended for the first half of next weekend’s huge game at Texas.

Baylor is still very much alive for a bowl game, needing to win one of its final two games to reach the magic 6-win mark. Baylor still has games left against TCU and Texas Tech. Meanwhile, Iowa State was once 1-3 and even a bowl game seemed out of reach. But after the five wins in a row, the Cyclones remain very much in the conversation to reach the Big 12 Championship game. Iowa State needs to win its final two games against Texas and Kansas State, and have West Virginia to lose a game against either Oklahoma State or Oklahoma, to make it to Arlington on December 1st.