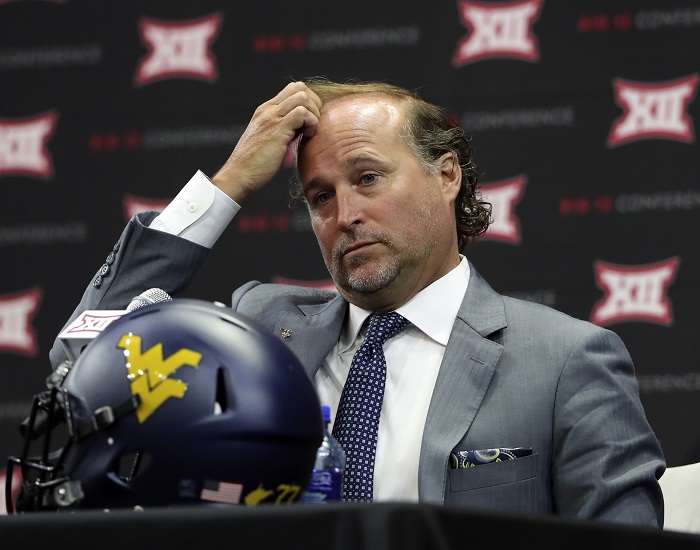 Dana Holgorsen did a sit down with Sports Illustrated to talk about his new gig as the head coach of the Houston Cougars, and one statement in particular stood out to me. “We weren’t going to get high school kids at West Virginia that we were going to win the Big 12 with.”

The sirens went off in my head as I read this. Now in the piece, the following is cited, “Over a 10-cycle period from 2008 to ’17, the state of West Virginia produced 28 players who signed with Power 5 schools. Over that same period, the city of Houston churned out 211 Power 5 signees. It’s why Holgorsen’s flight budget at WVU was $250,000 and why his flight budget at Houston will be close to zero.”

There’s no doubt that the recruiting ground in the Houston metro is far greater than what Dana Holgorsen had to work with in West Virginia, but here’s the problem for the former WVU head coach: He’s excuse making.

Holgorsen started the 2018 season in Morgantown with arguably the most talented offense in the Big 12. You want to tell me OU’s was more talented? Fine. I think we could have flipped a coin. This team was picked by some, myself included, to win the Big 12 this past season.

And as for the talent, West Virginia had five players picked in last week’s NFL Draft, with only the Oklahoma Sooners getting more players drafted in the Big 12 Conference. Plus, I would argue it should have been six with David Sills not getting picked.

Dana Holgorsen had the talent to win the Big 12 last season. At the very least, he had the talent to get to the Big 12 Championship Game, and his team couldn’t event do that. They played terribly offensively in Ames, and then after a three-game winning streak against Baylor, Texas and TCU, they gave up a combined 105 points to Oklahoma State and Oklahoma, losing both games and missing out on a trip to Arlington.

Holgorsen is right to say there is not a ton of talent in West Virginia, but his recruiting strategy at times didn’t make a ton of sense to me. He would hit the WV, OH, PA area, which obviously works geographically, however it was always more of Big Ten country, and he wasn’t landing the top guys, for the most part. But what about Texas? I know it’s a trek, but Holgorsen spent the bulk of his career in Texas and Oklahoma. He knew that territory and he was coaching in a conference where you were guaranteed to play at least a couple of road games per year in the Lone Star State. Find the guys who are being underrecruited and want to play in the Big 12. Morgantown in an awesome college town, if you can get ’em there, they’ll like it. I do recall reading how Holgorsen often said he had trouble getting kids to even visit. If so, that’s partially on him. Your the salesman. Then, get yourself someone on the staff from a recruiting standpoint who knows the Texas high school football scene really well. There are things that could have and should have been done.

For now, it’s all old news and water under the bridge. But reading the SI piece was frustrating, because it did make me wonder what could have been for Dana in Morgantown.

Alas, it’s onto Neal Brown, and from what I can tell, not many WVU fans are upset about this.