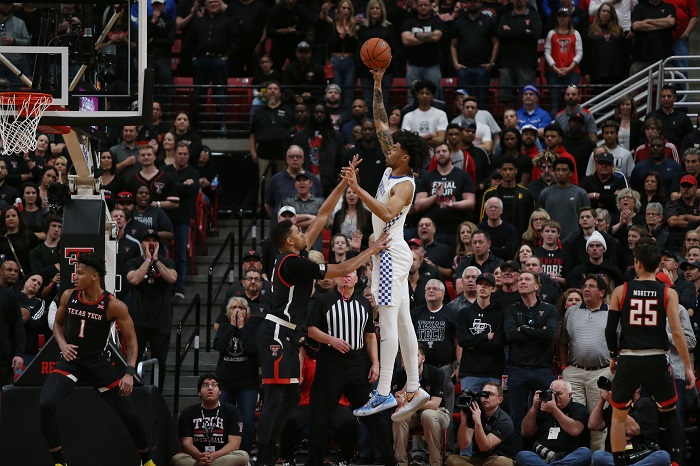 LUBBOCK, Texas — The Big 12-SEC Challenge brought the high drama to United Supermarkets Arena on Saturday. And it stubbornly refused to leave after 40 minutes of regulation.

So it took Kentucky an extra five minutes to outlast Texas Tech, 76-74, in front of a sellout crowd at United Supermarkets Arena as part of the Big 12-SEC Challenge.

It was everything the locals could have hoped for in hosting one of the game’s true blue blood programs. Except, of course, for the loss, something Texas Tech (12-7) head coach Chris Beard wouldn’t make excuses for afterward.

#WreckEm head coach Chris Beard on the fact that there are “no moral victories” after Saturday’s game with #Kentucky in the #Big12SEC Challenge #UKvsTT #TTU #4to1 @Heartland_CS pic.twitter.com/VvUsxEJ1Lh

Texas Tech has now lost as many games this season as it did last season, when it reached the national championship game.

Overtime was a snapshot of the entire game. Tech fell behind by 6 points with 3:13 left and then chipped its way back into the game. Kyler Edwards hit a basket. Kentucky’s Ashton Hagans missed a layup and then Red Raiders guard Terrance Shannon Jr. went to the other end, drew a foul and made two free throws to cut the lead to 72-70 with 2:25 left.

Then after another minute, one in which Kentucky was called for a backcourt and an offensive foul, Shannon again drove to the basket, drew a foul and made two free throws to tie the game at 72-all with 1:12 left.

Tech’s ability to draw charges all night proved a big problem for Kentucky, which finished with 20 turnovers.

#Kentucky head coach John Calipari on how Tech’s ability to take a charge influenced the turnover ratio after Saturday’s game with #WreckEm in the #Big12SEC Challenge #UKvsTT #TGT @Heartland_CS pic.twitter.com/HHOVKldbrG

Kentucky’s Immanuel Quickley drove to the basket on the other end, drew a foul from Shannon and made both free throws to put Kentucky back ahead, 74-72, with 47 seconds left.

On the ensuing possession Tech’s Davide Moretti drove to the basket and passed it to Kevin McCullar, who made the shot and drew a foul. His basket tied the game with 30 seconds left and the free throw could have given the Red Raiders the lead. But he missed it. He managed to get it back and Tech called a timeout with 25 seconds left.

McCullar logged some key minutes for the Red Raiders, and his status was in question after a first-half collision that left him with what looked like a head injury. He was cleared at halftime and finished with six points and a rebound. Beard loved the effort.

#WreckEm head coach Chris Beard on the night of Kevin McCullar after Saturday’s game with #Kentucky in the #Big12SEC Challenge #UKvsTT #TTU #4to1 @Heartland_CS pic.twitter.com/XR8W7H5WMu

With a seven-second difference between the shot clock and the game clock, the Red Raiders knew the Wildcats would likely get the ball back one more time. But the Red Raiders couldn’t grab the lead as Shannon missed his shot and Kentucky grabbed the rebound. Richards then drew a foul from Holyfield, sending him back to the free throw line. Richards made both to put Kentucky back up two points with 10 seconds left. But, it did give the Red Raiders one more shot to tie, or even win, the game.

Moretti brought the ball up the floor and drove to the basket. He appeared to have an open lane to drive to the basket but at the last second he had the ball stripped from him, and after a short scrum trying to get the ball back, the ball went out of bounds with less than a second left. Initially Tech was awarded the ball. But after a replay review, the ball went to Kentucky to finish off the final second.

Richards was a huge part of the win for Kentucky, finishing with 25 points, 14 rebounds and a great night at the free-throw line (11-of-14). Much of that came in the latter stages of regulation and overtime, even as Texas Tech’s student section gave him everything it could every time he had the ball.

“It was just the heat of the moment,” Richards said, likening Tech’s gameday atmosphere to Auburn’s, which was a compliment. “Every time I came in and they booed me. It was fun to have that interaction back and forth.”

Quickley finished with 21 points, including four 3-pointers, for Kentucky.

Texas Tech’s Kyler Edwards led the Red Raiders with 18 points, while Moretti had 15 and Shannon had 12. For the second straight game the Red Raiders struggled from the 3-point line, going just 3-of-19.

John Calipari on Texas Tech Fans: ‘This was a Classy Crowd’
Big 12 Basketball Week 4: The Good, the Bad and the Ugly
To Top