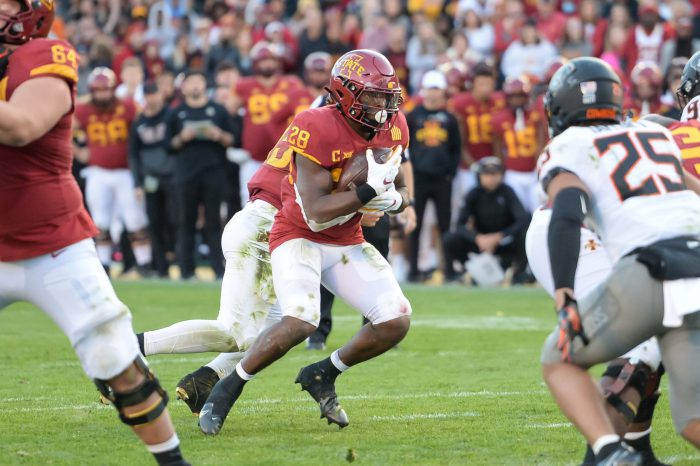 One day after Breece Hall announced he was skipping his senior season and declaring for the 2022 NFL Draft, his mother said he will not be playing in this month’s Cheez-It Bowl against Clemson.

Hall’s mother broke the news to the Des Moines Register. This is far from unusual, in fact it’s become common place for those who declare early and are not playing in a College Football Playoff. This gives them time to start NFL preparations, but also just as important, avoiding injury in a game that is being seen as having far less value, especially when compared to the Playoff.

Hall was named the Big 12 Offensive Player of the Year after he finished the 2021 regular season with 1,766 all-purpose yards, good for first in the Big 12 and fifth in the country. He is also in a three-way tie for first in the country, with 20 rushing touchdowns on the year. Hall was the fourth player to earn two Big 12 Offensive Player of the Year honors and the third to do it in consecutive years.

As a result, Jirehl Brock, Hall’s backup, will be the starting running back in the bowl game. Brock has rushed for 132 yards and one touchdown this year, with four catches for 22 yards and a score.