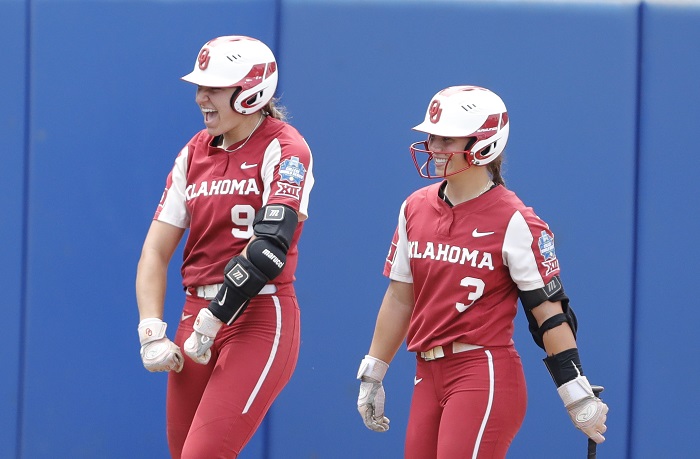 The Oklahoma Sooners took care of business against the Northwestern Wildcats on Thursday afternoon in their first game of the Women’s College World Series, winning 13-2 to enter the winner’s bracket on Saturday.

The win pits Oklahoma against a red-hot Texas team that has won three straight games against top-five opponents. The Red River rivals will open up play on Saturday at 2:00 p.m. sending the winner to the semifinals and the loser to the other side of the bracket.

Here are three thoughts on Oklahoma’s opening-round victory over Northwestern.

It is Impossible to Pitch Around the Sooners

I know that the country is probably sick of hearing about how good the Sooners are, but this team looks like a generational squad that is absolutely must-see TV. Danielle Williams, the Big Ten Pitcher of the Year, had Oklahoma’s lineup right where she wanted them through two innings, but then the bottom of the third came around.

It was then that the Sooners began to crack the code and when they did, an avalanche of points followed. OU’s entire lineup had a plate appearance that inning and Tiare Jennings made the Wildcats pay for it with a grand slam that gave the Sooners a 5-1 lead, which grew to 6-1 when Rylie Boone got her second hit of the inning. It just got worse from there as the Sooners put up another seven runs in the fourth inning behind yet another grand slam, this time from Jana Johns, making it 13-1.

As much as Williams tried to pitch her way around the Oklahoma lineup, the deeper she dug the hole. This team is downright intimidating at the plate and there is no way around that.

It was Hope Trautwein, not Jordy Bahl, that got the start for the Sooners today and she had a bit of a rough start as she allowed four walks in her first three innings of work, plus a solo home run to the Big Ten Player of the Year, Rachel Lewis. However, she responded fabulously and didn’t allow another run, or hit for that matter, for the rest of her appearance. Hope finished the game with seven strikeouts, one earned run, five walks, and one hit in 4.2 IP.

Trautwein has proven herself a legitimate weapon in the circle for Oklahoma over the course of the 2022 season, but has emphasized that fact in the last few weeks.

With Jordy Bahl back and Nicole May dealing, this pitching staff is playing its best softball, and that should terrify the rest of the WCWS field.

Jordy Bahl Makes Her Return to the Circle

For the first time since Game 2 of the Bedlam Series in Norman on May 6, Jordy Bahl made her much-anticipated return to the circle in the fifth inning of this game. After Hope Trautwein struck out back-to-back batters, Patty Gasso finally made the call to get Jordy Bahl back in the game.

In her first postseason appearance of the season, Bahl struggled a bit, allowing back-to-back hits and one run before her third batter grounded out into a fielder’s choice. Now, how much of that was nerves, and how much was pain? Only the Sooners know, but one thing is certain: Texas has to prepare for all three arms in Saturday’s game.

After the game, head coach Patty Gasso spoke about Bahl’s return to the circle.

“Jordy, she’s made differently,” Gasso said. “To see her doing what she’s doing today is the biggest victory that we’ve had thus fair this season.”

Having Bahl back in the mix gives opponents another pitcher to worry about, and that is scary when you consider what Trautwein and May have done this postseason.