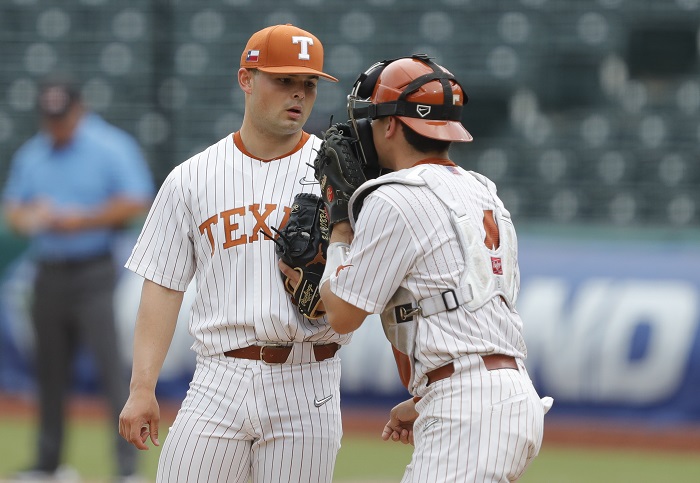 The road to Omaha began last week as 64 teams started their postseason journey. Now the field has been cut down to just 16 as we head to the Supers. The Texas Longhorns started their Super Regional in Greenville, North Carolina to take on East Carolina. Here are my four thoughts on the Longhorns win over the Pirates on Sunday night.

I know Tristan Stevens has had his fair share of struggles and even in this series, but he put on a show on Sunday night. Before I get to his performance on the mound, let’s talk about what he had to do to even get there. This game was supposed to start at 4 p.m. eastern time and while the game did start, there was a lengthy six-hour rain delay. Despite the setback, Tristan still came out and was dominant. He pitched six full innings and allowed just a single run. What Tristan did was impressive, and I am not sure how many pitchers would look as good as he did after such a delay like that. Coming into this series I was curious to see who the potential third starting pitcher would be in the Texas rotation and I think it is safe to say that Tristan Stevens will be that guy.

Coming into this series, we all knew about how well Texas can hit the ball. The Longhorns have one of the best offenses in college baseball and have been deadly at the plate this season. Despite dealing with some shaky pitching in the first two games of this Super Regional, the bats have been there for Texas. Before the big rain delay, Ivan Melendez got the game started with a three-run bomb and Skyler Messinger capped it off by driving in another run. The Longhorns would continue the early damage by scoring five runs in the second inning. Texas would cap off the game with a pair of homers from Trey Faltine and Silas Ardoin. This team has relied heavily on their bats and more often that not, it has worked. If they keep hitting this well in the College World Series than other teams better watch out.

I normally don’t talk about other teams outside of the Big 12 but I must give some credit where credit is due. The East Carolina fans were rowdy all weekend long and even on Sunday with the long delay, they still packed the stands and the outfield. They had a heck of a season and still are a great baseball program. With that said, how about these Texas Longhorns? After losing game one on Friday, they were down 7-2 going into the seventh inning on Saturday and were just nine outs away from going home. Not only did they come back on Saturday, but they dominated on Sunday which was very impressive.

4. Welcome Back to Omaha

For the 38th time in program history, the Texas Longhorns are going back to Omaha. Last season they were there and just one game away from making the finals. This is an incredibly good baseball team, and I am going to be extremely interested to see how this team responds after a big Super Regional win. Up next is Notre Dame in the College World Series and Texas better be ready because the Irish knocked off Tennessee who was the number one seed.