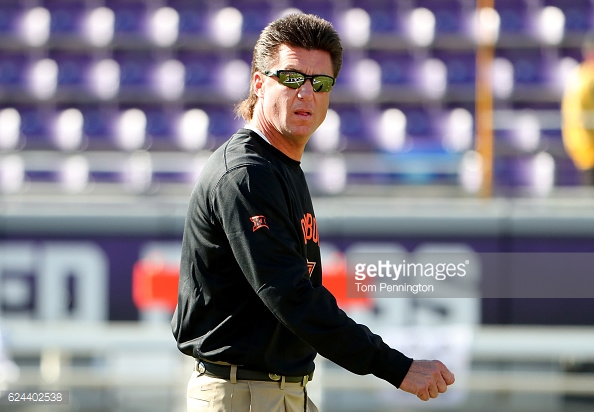 With Oklahoma State losing to Oklahoma in Bedlam for the 4th time in 5 years, it’s time for Mike Gundy to take a closer look at his staff.

Mike Gundy and his staff choked Bedlam away.  It’s that simple.

As an Oklahoma State fan, I like Gundy.  I appreciate what he has done for OSU. I believe he’s the best coach we have ever had and probably will ever have.  I’m not one of the insane fans that thinks we should run him off and try for something better.

I’m not Boone Pickens, who I’m sure will hint at that exact thing AGAIN after this game.

But here’s what frustrates me:  when is Mike Gundy, the first coach in school history to win 100 games, the coach who won a Big 12 Championship and BCS Bowl, going to start acting like that coach?

In big games, he coaches scared.  He’s more concerned with not losing than winning. His fear of making the mistake that costs him the game also keeps him from making the call that wins him the game.

He coached scared against the Sooners and it was obvious.  The first hint was right before the half where with the ball on the 50 he ran a draw and then let the clock run out instead of attempting to get in field goal range or letting his strong armed quarterback throw to the end zone as time expired.

Do you think with the roles reversed than Bob Stoops handles that the same way?  Do you think he is content to go into halftime tied, wasting good field position and leaving a timeout unused?  Of course not, and that’s why he’s wearing a brand new Big 12 Champion hat and Gundy isn’t.  Stoops would have treated it like it what it was: the defacto Championship Game against a top ten, instate rival.

He’d have tried to score because you NEED TO SCORE TO WIN THE GAME.

In a game like that you go for it on fourth and short, both in the first quarter on the goal line and again in the fourth quarter instead of settling for field goals.  Sure, the try in the fourth would have made it a one score game had it been good but if you don’t trust your offense to get two yards there what makes you think you can get them them later for the 2 point conversion you would need to tie the game?

The fact that he had to call a timeout to decide to go for it instead of punting earlier in that same drive was flat out embarrassing.  You don’t weigh options and play percentages in that game, you go win.

How many times did Mayfield have to roll out to his right against a 3 man rush and throw it to the void between the shallow corner and the deep safety before you realized it would be there all game?  It only took me seeing it twice before I knew Lincoln Riley found the weak spot down field. And I knew it wouldn’t change, so I wasn’t surprised to see Joe Mixon catch a touchdown in that exact spot in the defense.  That’s also where Dede Westbrook caught the ball for his long touchdown.

It was obvious on the first play of the second half that OU’s adjustments in run blocking were effective, and Spencer never changed it up.  Three down linemen and a linebacker, and Perine would pick a hole on one side between the center and guard, wait for the linebacker to commit to filling it, and the cut back to the gap on the other side.  Perine versus a safety or corner is a win for OU almost every time, but we never changed it up.

Spencer’s game plan against the run was impressive in the first half but it should’ve gotten easier after halftime without having to worry about the injured Westbrook.  Instead OU ran it down the Cowboy’s throats with ease after the break.

The rushing attack with Hill and Carson was potent in the first quarter, but Mike Stoops figured it out fast and Yurcich never recovered.  Besides two long bombs the passing game was ineffective.  That’s part Mason’s fault, part the receivers dropping balls, but it’s mostly on Yurcich.  When it becomes obvious your left tackle can’t handle the pass rush you have to stop calling deep pass plays.  Slants, screens, draws, moving the pocket, runs that go north and south not east and west….   all these things take advantage of an aggressive pass rush, or help to slow it down.  We did none of them.

Mike Stoops called an amazing game with exotic coverages and fancy pressures, and it was very, very effective.  Let’s not forget how terrible the Sooner defense is.  Even in the rain Rudolph and the receivers should have carved them up, but the younger Stoops made sure it didn’t happen.

So far all I’ve done is tell you things you already knew, but here’s what you may not realize:

IT ALL STARTS WITH GUNDY.

A team takes on the personality of its coach.  Gundy is cool.  He’s laid back.  He’s calm.  With that mullet he looks like he should be standing shirtless on a pontoon boat holding a cold Coors Light.  Glenn Spencer gets animated up in the booth but watch his interviews, he’s as much philosopher as he is coach.  Mike Yurcich is a thinker, he’s calm and collected.

The three main dudes in charge of the team are chill, so why wonder about the lack of a killer instinct?

Gundy let Bill Young go because he didn’t like the bend but don’t break defensive style and wanted a more aggressive, attacking team.  Has the promotion of Spencer provided that?

Dana Holgorsen and Todd Monken called offensive plays with both middle fingers in the air, daring you to stop them.  They wanted to make you regret playing defense against them and they almost always did.  Gundy reached a bit hiring Yurcich from the lower ranks, but he was touted as an inventive mind who called an exciting game.  At Gundy’s request over the years Yurcich’s offense has devolved into a pro style attack out of the shotgun, which actually hinders its running ability.

You’ll never convince me that all this “it’s all good, man” attitude doesn’t subconsciously trickle down to the players.  It’s like getting coached by Matthew McConaughey.

The best coaches know when to shake things up.  Stoops turned his staff over a few years ago.  Nick Saban hired Lane Kiffin to ramp up Bama’s attack.

It’s time for Gundy to do the same.

I don’t know if you fire anyone, but I’d do some moving starting with promoting Joe Bob Clements to co-defensive coordinator, complete with play calling duties.  The defensive line keeps getting better under him, they play hard and complete on every down.  His influence over the entire defense would be one of confidence and aggression.

I’d do the same with the offense, making Marcus Arroyo co-offensive coordinator with a hefty raise.  He’s Gundy’s best recruiter and has done an amazing job with the running backs.  He’s rumored as a candidate for a few different jobs, and making him co-OC may not keep him from taking a head coaching gig but it might keep him from leaving to be an OC for someone else.  Put him in charge of the running game, but still let Yurcich call the plays.

That comes with a catch though, and a big one:  Gundy needs to swallow his ego let Yurcich be Yurcich.

If you want Oklahoma State to run a pro style attack fire Yurcich and go hire a coordinator that does that.  Put Mason Rudolph under center, lead block with a full back for runs and play action over the top for passes.  I’m fine with it.  But don’t keep the free thinking, inventive, trick play, crazy Yurcich and tell him to throw away his three quarters of his play book.  Unleash him and either reap the rewards or pay the consequences.

It’s time to coach like a winner, Mike Gundy.  If you don’t have that mean streak in you let your coordinators have it for you.  You’ve done an amazing job raising all of our expectations for Oklahoma State football, but it’s time to take the next step.  After 12 years it’s time to stop being content with being competitive in every game.

After 12 years it’s time to expect to WIN every game.