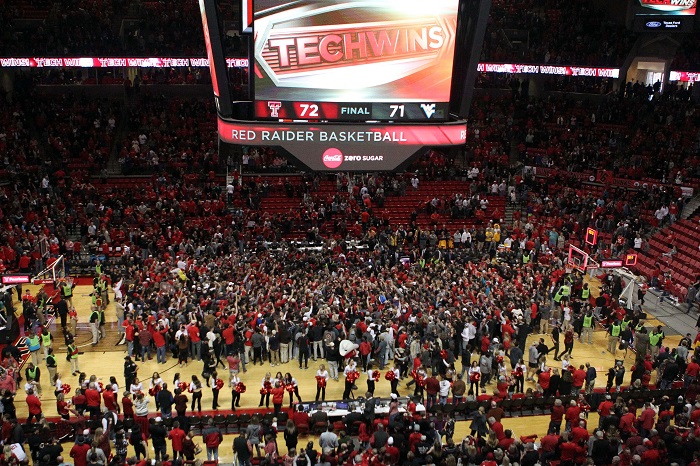 West Virginia’s 15-game winning streak came to an end yesterday in Lubbock, Texas against the Red Raiders and apparently a couple players took it worse than others.

As you can see in the video below, WVU’s Wesley Harris clearly attempts to throw a punch at a Texas Tech fan storming the court.

A West Virginia player threw a punch at a fan after the Texas Tech crowd stormed the court pic.twitter.com/rVfA0J2uRv

Then from this angle you can see Harris’ punch even clearer, while you also get to see Sagaba Konate getting into it with some fans as well before he gets pulled away.

I guess Wesley Harris #21 and @sagaba50 #50 from @WVUhoops were a little bitter after tonight’s loss to @TexasTechMBB Swinging at fans on the court 🙄 @Big12Conference @espn #wreckem #gunsup #ttu #wvu pic.twitter.com/cpTdNolmVX

Overall, chump move by the Mountaineers players, who have to be bigger and better than this. But I will also add, any team’s fan base who storms the court, WHEN YOU’RE RANKED IN THE TOP 10, is filled with some real losers. Tech fans are great, but I just hate this court storming stuff most of the time. I’m sorry Tech fans, you are #8 in the country, you should expect to win these games. I know this whole idea of being a top-ranked team in a revenue-generating sport is kind of a new thing for the first time in a decade, but you just can’t do it.

ALSO, not only that, you were the favorite! Tech was favored by three points heading into this game. Come on, guys!

Of course this doesn’t excuse the West Virginia players acting like real POS after losing, but I just had to use this opportunity to also get out my “when you’re ranking in the top 10 you can’t storm the court” rant. That’s all for now.