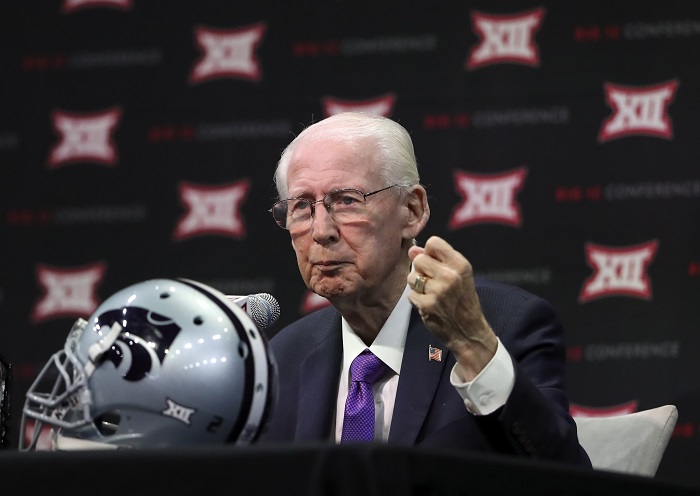 We are only one month into the season, but for Kansas State fans, it probably feels like a full 12 weeks thus far. It’s been a frustrating few weeks to date. There was the hold-your-breath win over South Dakota, the thrashing from Mississippi State, followed by a feel-good victory against UTSA, and then a pair of Big 12 losses, one road blowout at West Virginia, and a comeback that fell short against Texas in Manhattan last weekend.

Through it all, there has been surprising offensive line woes, unusual defensive concerns, oh, and that big quarterback controversy. It’s caused people, including us, to question whether or not Bill Snyder is at the tipping point of possibly doing more harm than good for the future of the Kansas State program. His die hard supports will say that he’s done so much for the university, he gets to call the shots and retire when he wants. From what I’ve gathered from feedback we’ve received, social media and elsewhere, that mentality appears to be sliding into the minority, while the majority are, if not loudly telling Coach Snyder, “it’s time”, are at least outwardly questioning, “when is it time?”

But what is interesting, is how the local media has appeared to be getting on Bill Snyder in recent weeks. Frankly, I’ve been impressed. I was not as impressed after the Mississippi State game I attended, and watched Snyder get away with saying, “I need to watch the tape”, over and over again when being asked questions about the game. It felt like a cop out and some local folks did not push him. That being said, the general theme of those covering the program over the past couple of weeks has steadily built up to the point where they are being tough, but fair, to coach and asking a lot of the right questions.

This would not happen in many college towns across America where the football coach is bigger than the program. But we are starting to see just that in Manhattan.

This week alone, KMAN sports director John Kurtz kicked off the conversation asking what everyone is missing and why Snyder has not picked Alex Delton or Skylar Thompson at quarterback.  Snyder eventually responded, saying, “What are you missing? Probably just that you’re not on the field coaching.”

“If it’s not working with one, you have to try something. It’s either that or I’m calling on you, and I’m dog-gone sure not going to do that,” Snyder continued.

Ah, yes, the old, “you’ve never done by job, so you have no business commenting on it” routine. It’s funny how coaches don’t say this kind of stuff when they are getting praised by media.

Kurtz followed up asking Snyder about Thompon’s second-half spart, to which Snyder did not give a ton of credit to his quarterback for. Eventually, after Kurtz pushed, Snyder was not having any of it.

Tried to ask another QB question to Snyder and he interrupts me: “you write what the hell you want to write.”

Bill Snyder is clearly frustrated, and, or, there is something going on between Snyder and Skylar Thompson, because the head coach just doesn’t want to give the young man very much credit. But that battle is now taking place between Snyder and the media. Frankly, if I’m Bill Snyder, I’m killing the media with kindness right now. Maybe he doesn’t feel like he has to do that because of his stature, but if he can keep the chorus of fans who want him to finally retire at bay, the better off he is. Starting petty fights and being snappy with media members isn’t going to help his cause here moving forward.

Some of you will say I’m just a media guy defending media guys. I’m not. I have a couple guys I consider friends who cover Kansas State, but they don’t need me to come to their defense. They’re big boys.

I’m more fascinated with how the relationship between Snyder and the local media appears to have deteriorated significantly in recent weeks, which will only further the divide between the pro-Snyder and anti-Snyder folks as we approach the potential steep precipice of the legendary Bill Snyder Era in Manhattan, Kansas.