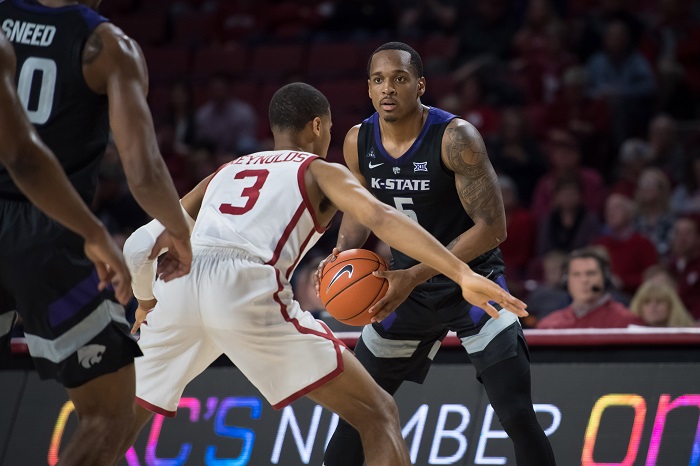 After watching each of the Big 12 games for Week 8 of the league season (Feb. 18-23), here is the Heartland College Sports Men’s Basketball Starting 5.

The Red Raiders played just one game during the week, but their top player delivered a thrilling performance in the Red Raiders’ blowout win in prime time over Kansas. Culver scored 26 points in the victory, shooting nearly 50 percent from the floor and hitting a trio of 3-pointers. It was one of his best overall games of the season and it came at the perfect time, as the Red Raiders are a game back of Kansas State in the Big 12 standings after the win.

Noi missed the Horned Frogs’ loss to Oklahoma State earlier in the week due to injury. But against Iowa State on Saturday he was scintillating — 20 points, 13 rebounds, a steal, a block and an assist in the Horned Frogs’ upset of the ranked Cyclones. Given how the Horned Frogs had played the last two weeks prior, it’s clear they missed Noi’s length and outside shooting.

The Bears had a great week, beating Iowa State on the road and then taking care of West Virginia at home. Kegler was in the middle of both wins. Against West Virginia he had a double-double — 23 points and 10 rebounds — along with 3 assists. Against Iowa State he had 9 points, 6 rebounds and 5 assists. Kegler has emerged as a driving force for these Bears since the loss to Tristan Clark last month, and he has assumed more of the load with injuries to King McClure and Makai Mason, the latter of which is back on the floor.

The Sooners needed a win on Saturday against Texas and they turned to James for some help. He led the Sooners with 19 points, drained four 3-pointers and had 8 rebounds as Sooners took the win and further solidified their NCAA hopes. James’ game, after a lull, is starting to turn a corner.

Brown is critical to keeping the Wildcats in first place in the Big 12. During the Wildcats’ 2-0 week he hit double figures both times (21 points against West Virginia and 10 points against Oklahoma State). But his impact went beyond scoring, as he totaled 10 rebounds, 7 assists and 7 steals for the week.

West Virginia pushed the Bears to the brink on Saturday. One reason the Bears didn’t lose was Bandoo, who came off the bench to score 22 points, including four 3-pointers.