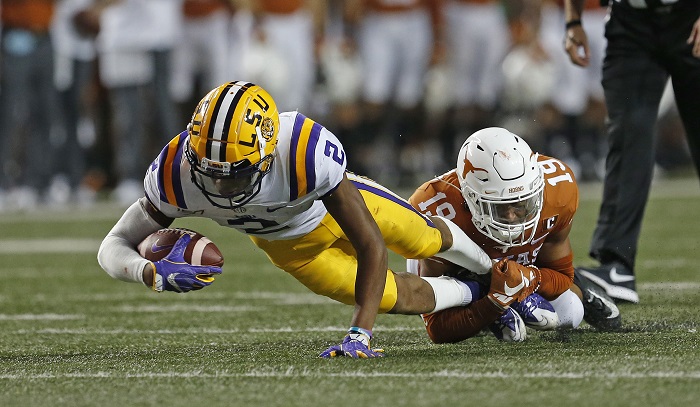 Tom Herman has made a living as an underdog. Whether it was 2016 when he was the head coach of the Houston Cougars and beat Bob Stoops and the Oklahoma Sooners in the opener. Or if it was last season as the head coach at Texas, beating Oklahoma in the regular season and Georgia in the Sugar Bowl. Unfortunately, Herman couldn’t live up to that reputation on Saturday night in a 45-38 loss to LSU at home.

The first half was 30 minutes of missed opportunities. Keaontay Ingram dropped a wide open touchdown pass on fourth down in the first quarter that would’ve put Texas up 6-3. After a Texas interception, the Longhorns had another fourth and goal opportunity from the one-yard line and Sam Ehlinger was stuffed on a run off the right side. Then, Tom Herman got a little greedy late in the second quarter stopping the clock with under two minutes left before an LSU field goal. But the Longhorns went three and out and LSU was able to go 58 yards in three plays, capped off by a Joe Burrow 21-yard touchdown to Justin Jefferson and the Tigers went into halftime up 20-7.

Granted, the Longhorns got exactly what they needed to start the third quarter. After forcing LSU into a three and out, Texas went 86 yards in 19 plays, chewing up 7:17 to cut the lead to 20-14. That kicked off eight-straight combined possessions with points. LSU’s field goal put them up 23-14 and Texas responded with with seven plays for 75 yards, capped off by Sam Ehlinger’s beautiful 20-yard toss to Jake Smith and Texas trailed 23-21. But the Longhorns defensive backs struggled all night long and Joe Burrow led the Tigers back on a six-play, 75 yard drive in 2:44, ending with a 26-yard score to Terrance Marshall early in the fourth quarter for a 30-21 lead. However, 2:43 later, Sam Ehlinger connected on a 44-yard touchdown with Devin Duvernay on a 4th and 3, as Texas cut the lead back down to 2. LSU scored its next touchdown in 2:11 and took a 37-28 lead at the 10-minute mark in the fourth quarter.

The Longhorns responded with a ten-play drive for a field goal, but time was not on their side as they still trailed 37-31 with under four minutes left. The Longhorns needed a stop and on 3rd and 17, Todd Orlando called up a blitz, leaving his corners, who had already been having a tough night in man coverage and Joe Burrow had just enough time to find Justin Jefferson for 61 yards and another touchdown, and after a two-point conversion, LSU went up 45-31. Texas added a touchdown late before falling 45-38.

The Tigers had five second half possessions, scoring three touchdowns, one field goal and one punt. For the game, Joe Burrow threw for 471 yards, piling up another 106 on the ground, for 577 total yards.

The Longhorns proved they can compete with the best of the best, but to get themselves geared up for a run at a Big 12 title, Herman and Orlando have some work to do with this defense, especially before the Red River Rivalry in just over one month. Lincoln Riley has got to be licking his chops at some of what he saw tonight in Austin.

Best College GameDay Signs from University of Texas
Big 12 Football’s Week 2: The Good, the Bad, and the Ugly
To Top