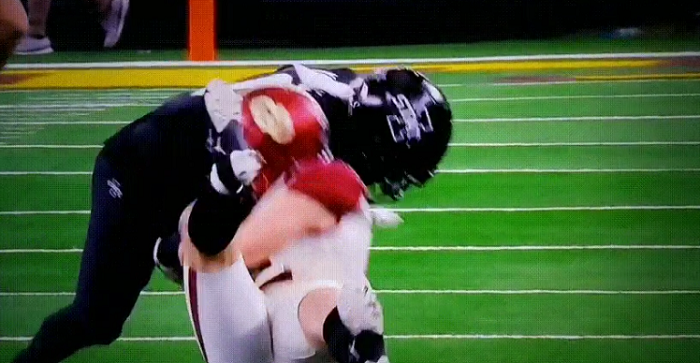 Here’s a video of the hit.

Is this the letter of the law? Probably. But in a game as important as the Big 12 Championship, there has to be some judgement used and clearly there was no negative intent by Isheem Young.

Isheem Young played a huge role in Iowa State’s win over the Sooners earlier in the season, picking off Spencer Rattler to ice the game in the fourth quarter.

He is a redshirt freshman with 44 tackles, two forced fumbles and one interception on the season. Young was a four-star recruit who picked Iowa State over Georgia, Baylor, Penn State and West Virginia.

The Sooners would take the ball down the field on that drive and score for a 7-0 lead. Oklahoma opened up as a five-point favorite as they try to win their sixth consecutive Big 12 Championship, while Iowa State is trying to win its first football conference title in 108 years.