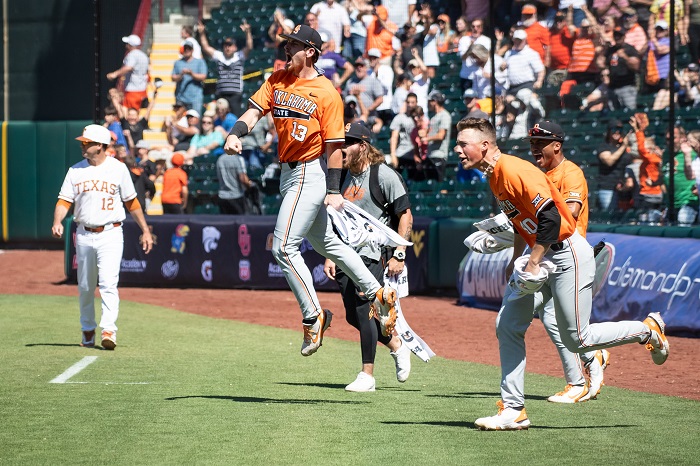 The Oklahoma State Cowboys continued their NCAA baseball regional with an 5-3 win over Grand Canyon on Saturday afternoon in Tucson, Arizona. Here are three takeaways from the game as the Cowboys prepare for Sunday’s game.

That had to be Oklahoma State’s mantra on Saturday in an elimination game. And that’s what Oklahoma State did on offense. Sure, Cade Cabiness had a home run in the top of the fourth inning, which gave Oklahoma State a 2-1 lead (a lead it did not surrender after that, by the way). But the rest of the offense qualified as ‘just get the job done.” Marcus Brown’s RBI single in the second inning was preceded by a Carson McCusker single and a Cabbiness double. In the fifth, as the Cowboys built a 4-1 lead, Max Hewitt singled, advanced to second on a Christian Encarnacion-Strand single, and then Jake Thompson walked to load the bases. McCusker’s fielder’s choice scored Hewitt, and then a Grand Canyon throwing error later scored Encarnacion-Strand.

The Cowboys seemed to be in control entering the bottom of the seventh inning, up 4-2. But Grand Canyon had other ideas. And the Lopes had a great chance to tie the game as the bottom half of that inning developed. Jonny Weaver had a one-out single, followed by a Channy Ortiz walk. Brock Burton then singled to drive in Weaver, which made it 4-3 Cowboys. At that point, head coach Josh Holliday had to make a pitching change, bringing in Kale Davis for starter Parker Scott.

It proved to be a good move. Scott induced a groundout from Jacob Wilson to first base, which froze the runners. With two away, Elijah Buries grounded out to third base on an 0-2 pitch as the Cowboys escaped without giving up the tying run.

It was a pivotal moment, especially when you think about the top of the eighth inning. The Cowboys added some cushion to their lead, as Nolan McLean led off with a homer to make it a 5-3 game.

3. Give it up to the pitching

Between Scott, Davis and closer Brett Standlee, the Cowboys put together a solid combination on the mound on Saturday.

Scott, the left-hander in his fifth season with the Cowboys, improved to 8-1 and looks like he’s shaken off the rust from that month of inactivity in April and May due to an injury. He pitched into the seventh inning, gave up all three runs (only two of which were earned), while giving up seven hits and two walks. He struck out four. He also threw 98 pitches.

Davis, who put out the fire in the seventh inning, threw for 1 2/3rd innings and didn’t give up a hit. He struck out one hitter.

Standlee came on in the ninth inning to claim his fifth save. He pitched a spotless inning.

Scott getting deep into the game may be key tomorrow as the Cowboys will have to play two games to stay in the regional on Sunday. It will be an ‘all-hands-on-deck’ situation for the Cowboys, no matter who they play, and Scott pitching into the seventh inning keeps Davis and Standlee a bit fresher going into a potential double-header situation on Sunday.