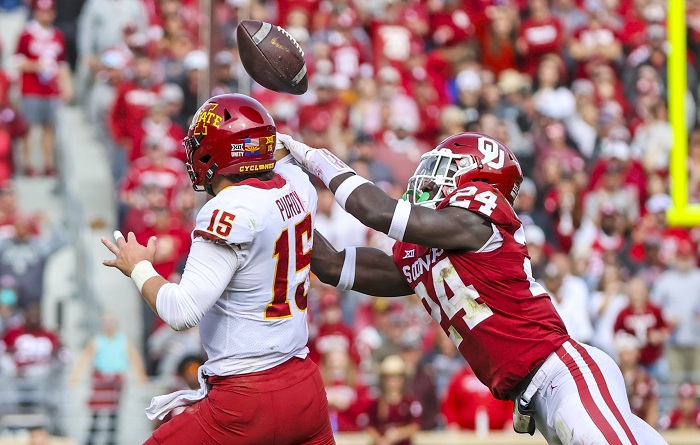 Week 12 of the 2021 Big 12 football season is in the books. We saw the top three teams in the Big 12 separate themselves in Oklahoma State, Oklahoma and Baylor clearly turning out to be the cream of the crop in the conference. Oklahoma State rolled Texas tech, Oklahoma handled Iowa State while Baylor took care of business against K-State. Otherwise, it was Kansas putting up a good fight against TCU, and West Virginia handed Texas a sixth-straight loss.

So with all those games over, here are the five biggest takeaways from Week 12.

Of course, the Pokes won the league in 2011, but that was during the six-year window when the league did not have a Championship Game.

Considering how this team looked in the non-conference against the likes of Missouri State, Tulsa and Boise State, it’s not only the team playing the best football in the Big 12 right now, it’s also the most improved team in the Big 12 from the start of the season. Spencer Sanders continues to play clean football, which allows this defense and running game to do its thing. OSU gave up a total of 108 yards in their shutout of Texas Tech on Saturday night. As far as I’m concerned, this is a Playoff-worthy team. But they do have to win out.

2. Is Kansas Done Being a Pushover?

I’m not here predicting any lengthy winning streaks for the Jayhawks any time soon, but Kansas has felt like it’s been a three to five-touchdown underdog in most of its Big 12 games the last few seasons. KU came into this game against TCU as a three-touchdown underdog, and while TCU doesn’t deserve to be a three-touchdown favorite over anyone, KU is also a program that continues to get better. That showed again after a hard-fought 31-28 loss. Three of their last five games have been a near-upset against OU, a win over Texas, and this near-miss against TCU.

Kansas could still end the season with a big loss against West Virginia next week, but it’s no longer a guarantee that this team is going to lose big in its Big 12 games.

We’ve waited all season for Oklahoma’s defense to look like it did on Saturday in a win over Iowa State. Oklahoma came into the game ranked sixth in the Big 12 in rushing yards allowed per game, but the Cyclones came into the game averaging over five yards per carry, yet on Saturday they were held to just 1.5 yards per carry, with Breece Hall held to just 57 yards on 19 carries. The Sooners forced four fumbles, recovered one, and had two interceptions to win the turnover battle against Iowa State 3-1, and only a couple of lucky Iowa State bounces kept that from being even worse.

OU’s defensive front added seven sacks, 11 tackles for loss and six QB hurries. Brock Purdy and Hunter Dekkers were running for their lives all afternoon, and while their offensive line didn’t help the cause, Oklahoma was also playing at a different level we haven’t really seen, but have expected, this season.

Both of these programs have been generally successful over the past decade, but after Saturday’s 20-10 Baylor win, the Bears have won four in a row over K-State. And if you go back to 2010, Baylor holds a 9-3 record against the Wildcats. And it even happened after starting QB Gerry Bohanon went down for the Bears with a hamstring injury, and back up Blake Shapen completed 16 of 21 passes for 137 yards to steady the Bears on offense, and then the Baylor defense did its thing to secure the win. Shapen had three career passes coming into this game. With the win, the Bears are still looking at a real chance of making the Big 12 Championship Game. They need Oklahoma State to beat Oklahoma in Bedlam, while also picking up a win over Texas Tech, and then they’ll be in Arlington for their second Big 12 title game in three seasons.

5. No Bowling for Texas

With Texas’ loss to West Virginia on Saturday, the Longhorns dropped to 4-7 and will miss a bowl game for the first time since 2016. The losing streak for Texas, which has now reached six games, is its longest since it dropped eight in a row in 1956. Since the program started in 1893, there have only been four losing streaks that lasted five games or longer. And to make matters worse, this was the first game during the losing streak that Texas never held a lead in. Quarterback Casey Thompson had one of his worst outings of the season, completing 4 of 14 passes for 29 yards after throwing for 358 yards against Kansas last week. Hudson Card played most of the second half and went 10 of 16 for 123 yards with one touchdown. Neither were all that impressive as Steve Sarkisian limps this team to the finish line as they wrap up a hugely disappointing 2021 season next week against the Kansas State Wildcats.

Iowa State Football Fans: Don’t Forget Where We Came From
Big 12 Football Week 12: The Good, The Bad and the Ugly
To Top