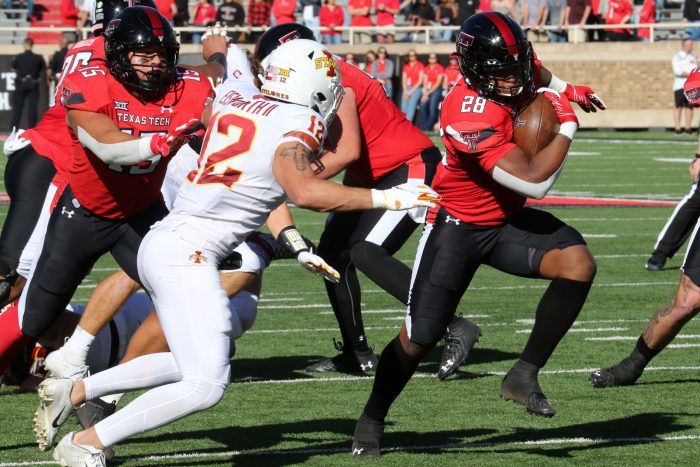 Fun Fact: In case ANYONE needs the reminder … Mississippi State head coach Mike Leach was the head coach at Texas Tech from 2000-09, where he won 84 games and made the Red Raiders one of the most explosive offensive teams in the country, with a high-water mark of 11-2 in 2008. Leach was fired in 2009 after Texas Tech accused him of a “a defiant act of insubordination” in a dispute over how Leach treated a Red Raiders player, Adam James, when the latter suffered a concussion. Leach sued Texas Tech and James’ father, Craig James, and to this day he contends the university still owes him $2.5 million. Leach has not faced the Red Raiders in football since he re-joined the coaching ranks with Washington State in 2012.

So this should be fun.

QB Donovan Smith: With a new staff coming in, Smith has one final opportunity to impress before the offseason begins. Smith grabbed the job due to injury, but the Red Raiders committed to the former three-star prospect for the final three games and, while he certainly struggled against Oklahoma State, he threw for at least 250 yards in two of his three starts, and has 929 passing yards with six touchdowns and two interceptions.

WR Erik Ezukanma: After an All-Big 12 First-Team selection last season, he made All-Big 12 Second Team honors this season after catching 48 passes for 705 yards and four touchdowns this season. He’s the Red Raiders’ biggest threat to break the game open. And, now a junior, he’s a threat to declare early for the NFL Draft, if he so chooses.

LB Colin Schooler: Another All-Big 12 Second Team selection for the Red Raiders, Schooler had a team-leading 97 tackles (63 solo), along with 5 1/2 tackles for loss, a sack and an interception. He also led the Red Raiders with 10 quarterback hurries. The senior transfer has a decision to make. As a fourth-year player, since he played in 2020 during COVID, he could come back in 2020 for a super-senior season. If he doesn’t the NFL should be interested.

QB Will Rogers: Here’s a quarterback who hasn’t met a receiver he didn’t want to throw a pass to. He threw the ball 630 times this season, about what you would expect from an Air Raid offense, which included a 75.1 completion percentage, 4,449 yards, 35 touchdowns and eight interceptions. He was overshadowed by Heisman Trophy winner Bryce Young of Alabama and future first-round pick Matt Corral of Ole Miss. But he can spin it.

DB Emmanuel Forbes: Texas Tech should keep an eye on the All-SEC Second Team defensive back. Forbes led the Bulldogs with three interceptions, and had 53 tackles, a sack, 4 1/2 tackles for loss and five pass break-ups along the way.

OL Charles Cross: Cross, a redshirt sophomore, was an All-SEC First Team selection for his work protecting Rogers and helping the run game rush for nearly 1,000 yards this season. That’s no surprise, though. He was All-SEC freshman last season and was Pro Football Focus’ No. 4 ranked pass blocker in 2020.

It’s been a year in Lubbock. Tech won three of its first four games before losing starting quarterback Tyler Shough to injury. Still, with Henry Colombi, the Red Raiders stole a win at West Virginia and came within a win of bowl eligibility after beating Kansas. Then, athletic director Kirby Hocutt fired Matt Wells, installed Sonny Cumbie as the interim head coach and hired Joey McGuire to be the new head coach. Along the way, Colombi got hurt, the Red Raiders started freshman Donovan Smith and he and Cumbie led the Red Raiders to an upset of Iowa State to reach bowl eligibility. Cumbie will coach in the bowl game before taking over full-time as the new head coach at Louisiana Tech. Meanwhile, McGuire is assembling a staff that includes new defensive coordinator Tim DeRuyter and new offensive coordinator Zach Kittley, while retaining running backs coach DeAndre Smith (who just happens to be Donovan’s father).

Like I said, it’s been a year in Lubbock.

Mississippi State started the season by splitting their first four games, including a close loss to LSU, but followed that with an upset win at Texas A&M. Following the next game’s loss against Alabama, the Bulldogs won four of their next five games to become bowl-eligible and carry some momentum into their Egg Bowl game with Ole Miss. The Rebels won the game, 31-21, but the Bulldogs can feel good about getting to a bowl game in their second season under head coach Mike Leach. Plus, with QB Will Rogers being only a sophomore, the Bulldogs are built to take a big step in 2022.

None of Texas Tech’s players remember anything about Leach’s time — and departure — from Texas Tech. ‘The Pirate’ has a REALLY long memory. He can talk all he want about this ‘not being personal,’ but at the end of the day he would love nothing more than to destroy the Red Raiders on the field, if he can’t get his $2.5 million back. I mean, I really can’t believe MSU and the SEC actually allowed this game to happen, if we’re being honest.