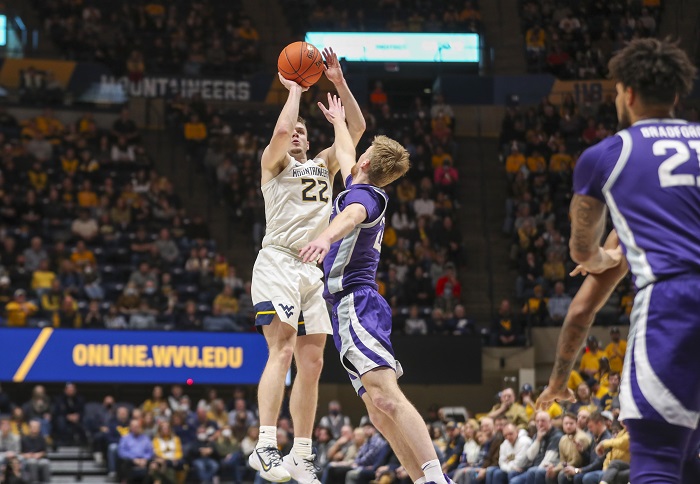 Even though the Wildcats lost the lead, they made the Mountaineers sweat it out, as a Markquis Nowell 3-pointer at the buzzer could have tied it. Two made free throws each by Kedrian Johnson and Jalen Bridges helped the Mountaineers preserve the victory.

West Virginia was back to full strength after a week off. The Mountaineers were without three players, including leading scorer Taz Sherman, due to COVID protocols when they started Big 12 play on New Year’s Day at Texas. After WVU’s scheduled game with TCU was postponed due to COVID issues at TCU, it received a week to get everyone right — and to make some adjustments on the floor.

Sean McNeil led WVU with a career-high 26 points, while Sherman had 14 points and Johnson added 11 points. Gabe Osabuohein, who missed the Texas game due to COVID protocols, had a game-high 12 rebounds.

Kansas State wasn’t so lucky. The Wildcats were down to seven scholarship players, and were without head coach Bruce Weber, in their 70-57 loss to Texas on Tuesday. Against the Mountaineers, K-State did get Nowell back, who averaged more than 12 points per game, and finished with 10 points on Saturday. But Weber was out for a second game, as well as assistant coach Shane Southwell. So, assistant coach Jermaine Henderson ran the bench.

Weber has been vocal about what he sees as the unfairness of his team having to play without a full roster for two straight games. Nijel Pack led the Wildcats with 20 points, while Ismael Massoud added 13 points.

It was Raining 3’s

McNeil and Pack both had huge games from behind the arc for their respective teams, giving fans a great show from two of the best offensive players in the conference.

McNeil’s career game came with a quartet of 3-pointers, part of a game where he made nine field goals and was a perfect 4-for-4 from the free-throw line. McNeil’s game from distance is nothing new. But, after a week off, the Mountaineers were grateful he shrugged off any rust from a week off. He entered the game 39 percent from the arc.

Pack poured in six 3-pointers as he became the Wildcats’ main source of offense. He was 7-of-18 from the floor but didn’t shoot a single free throw.

Pack is one of the league’s more impressive all-around players who doesn’t get much attention, and much of that has to do with the fact that Kansas State hasn’t been among the top teams in the Big 12 since he arrived last season. If one was cynical, you could say that Pack is ripe to transfer from the program and find a better situation. I hope that isn’t the case. I’d miss watching him play and he can be part of the answer at Kansas State.

Weber’s comments about the Big 12’s play policy in the face of COVID protocols are below:

“I don’t think it’s right, I think it’s unfair. I’ve expressed that to the league office last year. I did this year to our administration,” Weber said.

You have to dig a bit deeper to find the source of Weber’s frustration, and that’s in the story at ksnt.com. Weber was reportedly frustrated that WVU had players in COVID protocols when they played at Texas on Jan. 1 but had their game with TCU that following Monday postponed.

TCU didn’t have enough scholarship players to play against either the Mountaineers or their New Year’s Day opponent, Kansas.

It takes two teams to play a game, and Weber knows that. While the conference’s policy, which was amended in December, calls for games to be considered a ‘no contest’ if there are fewer than six available scholarship players, or one available coach, the guidance ALSO notes that every effort will be made to reschedule the game.

I take that to mean the Big 12 is going to make every effort to avoid a ‘no contest,’ if possible. So while WVU’s game with TCU doesn’t count as a win or a loss in the standings, I expect it to be made up at some point.

Weber has a lot to be frustrated about, not the least of which is not being on the bench with his team. But Texas Tech has already had one game postponed and rescheduled, and played its second game in a row with reduced numbers due to COVID and injury issues when it faced Kansas on Saturday. The women’s teams are doing the same thing, including Baylor, which played a game with seven scholarship players in a loss to Kansas State and then had its game with Texas on Sunday postponed once its scholarship numbers dip below six.

It’s clear the Big 12 is going to treat COVID differently this year. It’s also clear that, at least for now, they’re applying the guidelines as they presented them in December.

Kansas State has a bit of a break before it hosts TCU on Wednesday. After that, the Wildcats face four straight teams that, at the moment, are in the AP Top 25 — hosting Texas Tech on Jan. 15, traveling to Texas on Jan. 18, hosting Kansas on Jan. 22 and traveling to Baylor on Jan. 25. The Wildcats need to get healthy, and fast.