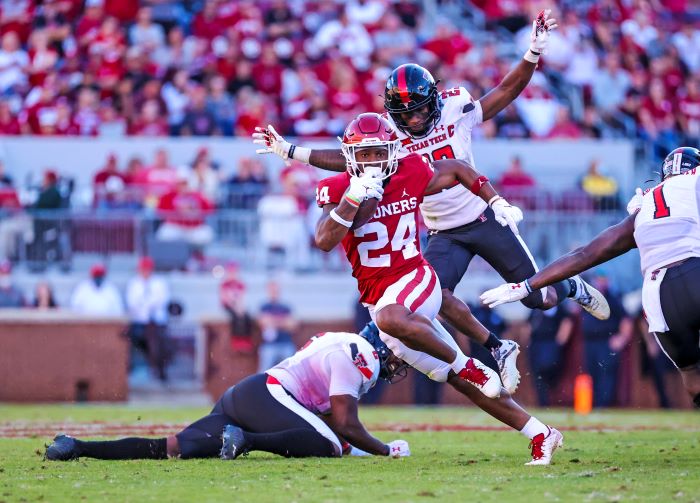 Here is everything you need to know about the upcoming matchup between the Oklahoma Sooners and the Texas Tech Red Raiders.

Fun Fact: Oklahoma scored at least 38 points in each of their last 12 games against the Red Raiders. It is the longest streak of 38 points or more against a single opponent in school history.

Oklahoma running back Eric Gray leads the Big 12 with 6.5 yards per carry and will be a major part of what the Sooners try to do on Saturday in Lubbock. On the season, Gray has 185 carries for 1,203 yards and 11 touchdowns, and against a Texas Tech defense that is allowing 162.5 rushing yards per game, he should have a big day.

Oklahoma’s secondary play has improved dramatically over the last few weeks and much of the credit needs to go to C.J. Coldon. Coldon leads the Sooners with three interceptions on the year and had one of the Sooners four picks against Oklahoma State. Texas Tech leads the Big 12 in passing offense this season, so Coldon should be busy on Saturday night.

Texas Tech has done something in 2022 that I would bet hasn’t been done much in college football history. The Red Raiders have started three different quarterbacks in four games this season, assuming that Shough starts against Oklahoma Saturday. Shough looked efficient against Iowa State last week, going 15-21 for 141 and a score through the air. He will need to replicate that kind of efficiency against the Sooners.

Texas Tech’s top defender, OLB Tyree Wilson, has announced that he will opt of out the remainder of the 2022 season and prepare for the NFL Draft after sustaining a foot injury against Kansas in Week 11. In his stead, Jesiah Pierre has stepped in and recorded 3.5 sacks in the last three games. He will need to be a big part of the Red Raiders’ plan to get pressure on Dillon Gabriel.

3:8. That is the touchdown to interception ratio that Oklahoma has allowed over its past four games. The media will tell you that Oklahoma’s opponents are playing against a brown paper sack defense, but the Sooners are improving week by week. Last week against Oklahoma State, the Sooners collected six sacks, 13 tackles for loss, 12 QB hurries, had four interceptions, and allowed just one touchdown. If Oklahoma can replicate that kind of production against Texas Tech, they will finish the regular season 7-5.

Texas Tech will have to finish the 2022 season without its top defensive player as Tyree Wilson is moving on to the NFL after opting out. Without him last week, the Red Raiders gave up 422 total yards to Iowa State, who got inside the Texas Tech five-yard line twice and came away with no points. Oklahoma’s offense has the ability to be explosive, but it has struggled to convert third downs over the last two weeks. Can the Red Raiders take advantage of that, and of an Oklahoma rushing defense that is giving up 191.4 yards on the ground per game?

Vegas tends to get things right more often than not, and when I have a hard time getting a feel on a game I tend to look at what they’re thinking. Oklahoma is currently favored in this game by two points, and the over/under is 64 points. That equals a nice clean 33-31 score in the Sooners’ favor, which is right around what I would expect in this game. Give me OU to edge out the Red Raiders for its 11th straight victory in this series.