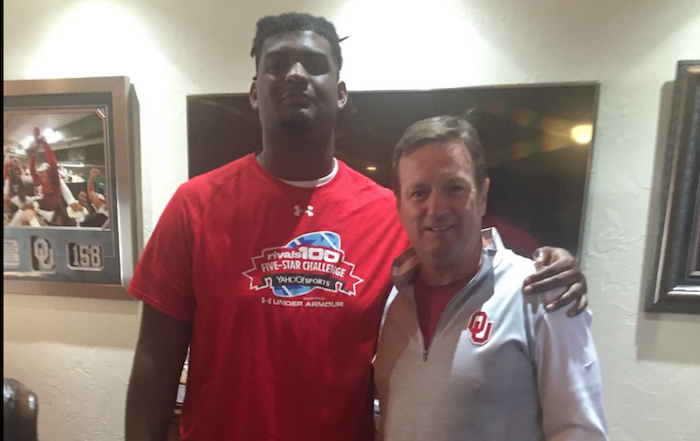 On the field, Ealy is a 4-star prospect at the offensive tackle position and is ranked by Rivals as the 6th best player in the state of Louisiana. If head coach Bob Stoop and Ealy have their way, the young man will be the next Lane Johnson and become a top-10 pick in the NFL Draft.

But off the field, Ealy told Heartland College Sports, “a lot of people see me as a quiet person, which I kind of am. But I’m actually a really funny person. When I was young I used to make people laugh without even trying too hard. I actually thought about being a comedian.”

His wit and humor paid off right away when I followed up by asking him if he’s ever tried his hand at stand up comedy, to which Ealy quipped, “only in my classes.”

When asked who is his favorite comedian and what his favorite comedy show is, Ealy showed he’s a historian of the medium, citing the legendary Redd Foxx, who starred in the 1970s sitcom Sanford and Son. In 2004, Comedy Central ranked the 100 greatest stand-ups of all time and Foxx came in at 24th on the list.

Ealy added that his sense of humor has helped him in big spots during a football game, adding, “If I’m nervous, I’ll just try to make a joke to loosen the mood.”

Ealy is from the small town of Gonzales, Louisiana, about an hour west of New Orleans off of Route 10. The Oklahoma commit describes it as a small and quiet town, but it’s claim to fame is it’s known as the”Jambalaya Capital of the World”, which includes its annual Jambalaya Festival, which was first held in 1968.

Ealy’s ties to the Bayou State run deep. Both his parents are from the area, his father from French Settlement, LA and his mother from Donaldsville, LA. Both parents grew up without football being a major part of their lives, as Ealy’s father was a basketball player and his mother was in the school band. But Ealy’s older brother started the trend, playing football where Ealy just finished his playing career, at East Ascension High School. Ealy points to his father and his brother as his biggest role models, saying “they both showed me how to be a man, watch my surroundings, and always pick the right places to be. I just always wanted to be like them.”

His father is a small business owner, running his own daycare, while his brother moves around several states working at a plant.

Ealy had up to 20 offers, many from the SEC, but fell in love with Norman and loves Oklahoma’s ability to develop offensive linemen. Since 2012, the Sooners have had 4 offensive linemen drafted (Donald Stephenson, Lane Johnson, Daryl Williams, Tyrus Thompson).

As for what the future holds for Ealy after football, the 17-year-old said he hopes to use his knowledge of the game, combine it with his sense of humor and end up in the broadcasting industry. Maybe the Charles Barkley of football? That has a nice ring to it.