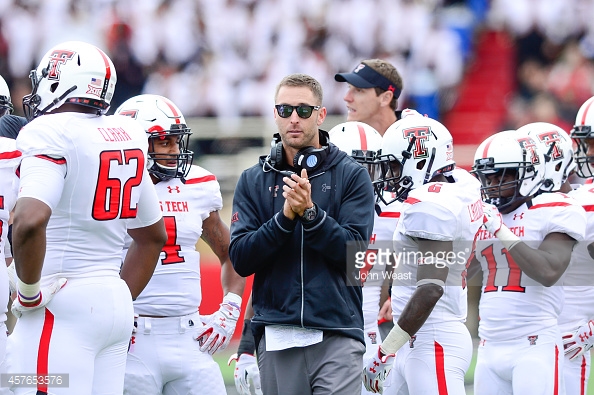 Texas Tech spring practice is around the corner and replacing Patrick Mahomes in Lubbock will be nearly impossible, but hey somebody’s do it right? Mahomes put up video game type numbers in his days as a Red Raider. Even though he may not have been in the win column a ton, it certainly wasn’t his fault that his team couldn’t stop opponent’s offenses. With Mahomes gone, Kliff Kingsbury (The quarterback whisperer) will face a tall task ahead of him (and no I am not talking about his job security) choosing the next guy to run his air raid offense. So let’s take a look at the list of candidates who could be the next signal caller in Lubbock shall we?

Shimonek joined the Red Raiders in 2014 after transferring from Iowa. He sat out the 2014 season due to NCAA transfer rules and saw his first action back in 2015 where he was third on the depth chart. After the departure of Davis Webb in 2016, Shimonek found himself sitting only behind Patrick Mahomes this past season. Most may know Nic from the Thursday night game against Kansas, where he threw for 271 yards and 4 touchdowns in less than a half of football. After the Kansas game, Shimonek didn’t see much of the field with Mahomes returning to the starting lineup.

Derek’s take: Shimonek is a pocket passer type quarterback. He isn’t going to wow anyone with his athletic ability but what impresses me the most is his quick decision making. This is crucial when running an air raid type offense. He knows where he wants to go with the football and he usually delivers on most occasions. Nic also has the advantage heading into Texas Tech spring practice of being in Kliff’s system for the past 3 seasons unlike any other quarterback on the roster.

Even though he lead Gilmer to a 2014 Texas state title and throwing for nearly 4,000 yards with 47 touchdowns, Carter drew very little interest from colleges, period. He finally decided on attending Incarnate Word (which was also his best offer at the time) in San Antonio, Texas, where he redshirted in 2015. After deciding that this wasn’t the right fit for him, he chose to transfer to Tyler Junior College (Tyler, TX). There Carter threw for 3,226 yards with 30 touchdowns on 9 picks. He also completed 58% of his passes during his time at Tyler. Following the 2016 season, McLane Carter weighed his options and chose to enroll at Texas Tech in January of 2017.

Derek’s take: Carter is a very solid quarterback. Even though he is left handed, he can still put some zip on his passes. I think most colleges were a bit timid to offer him because he is left handed. Carter is a guy who can extend time in the pocket with his footwork and let his instincts take over. He isn’t neccisarrrily a scrambler but he does throw a nice ball on the run when he needs to. What sticks out to me is his deep ball accuracy as he is able to hit his targets in stride. He may need some time to learn the offense and he needs to clean up his decision making at times because he will take chances too often. He will be fascinating to watch through Texas Tech spring practice.

After being Mr. Texas football and the Texas 5A state player of the year in 2015, Duffey was only a 3 star rated player coming out of Lake Ridge High School (Mansfield, TX). He won just about every award that a quarterback could in the state of Texas but yet he lacked national attention. He didn’t have a ton of offers on the table and he chose to enroll at Texas Tech in the spring of 2016. During the 2016 season, Duffey redshirted to prepare for the 2017 season. All seemed well until he was suspended by the university earlier this year. The reasons on why he was suspended have not been revealed but what we do know is that he won’t participate in Texas Tech spring practice. Duffey not eligible to return until the start of fall camp.

Derek’s take: Duffey has the capabilities to be a star in Lubbock under a guy like Kliff Kingsbury. His athletic and running abilities are where his game really shines. Jett has the vision of a running back playing quarterback when running with the football. He won’t be the fastest guy on the field, but he has great feel for the game. As well as his legs, Duffey does possess some touch on his deep ball as well as throwing accurately on the run. What concerns me about Duffey is that I have yet to see him run an offense that forces him to make smart, quick decisions. Also his pocket presence is something I would like to see him work on. While he does have a bright future, Duffey needs to clean up his act and get on the right track. With the suspension, don’t expect him to be the starter for 2017.

After leading his high school (Cibolo HS in Cibolo, TX) to a 6A title appearance, Xaiver had a dilemma on his hands. Even though he played quarterback, most colleges wanted him to play wide receiver. There was one man in particular that did decide to let him try his luck at quarterback, which is Kliff Kingsbury. Xaiver threw for 2,248 yards and 22 touchdowns his senior year as well as adding another 739 on the ground.

Derek’s take: Xavier is a very interesting prospect heading into Texas Tech spring practice. While I think his ceiling may be higher as a slot receiver, Kliff Kingsbury and company are going to give him a chance at quarterback. This is a guy who doesn’t wow you but is an all-around competitor under center. There were times where he put his team on his back on offense and lead them to victory. He has some very nice escape ability under pressure and can take off with the pigskin when he needs to. What worries me about Xavier is his inaccuracy. He is either spot on or way off target with his throws and at times is too sporadic with the football. Look for him to redshirt in 2017.

As we get set for Texas Tech spring practice, I have to give the nod to senior quarterback Nic Shimonek. In the end this will be a two horse race for the starting job in Lubbock between him and McLane Carter. Even though both guys are capable of running the offense, Shimonek’s experience (3 full years) is what is most likely to separate him from Carter. The spring game on April 1st in Frisco will be a great gauge on who the next stat hogging quarterback will be in Lubbock.