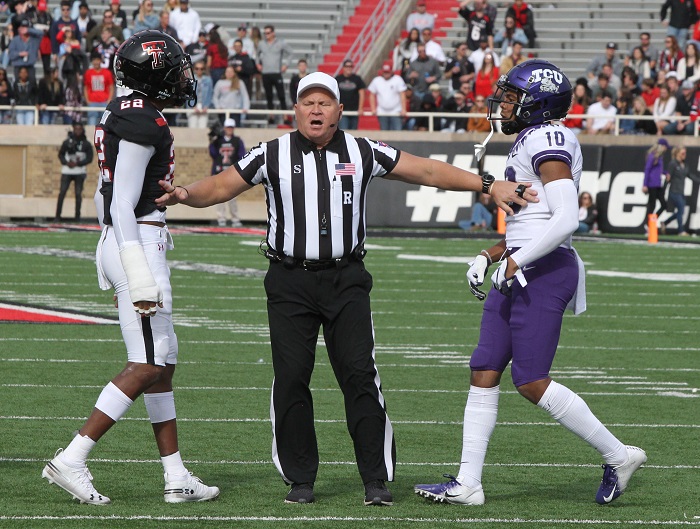 As someone who has watched and covered plenty of Big 12 football over the years, I have seen a lot. You are in the stands or on your couch watching a Big 12 football game and the ref makes a call that makes you cringe and the crowd scream in agony. We see it every week unfortunately around this conference yet one man seems to always to stick out more than others.

That man is none other than Mike Defee. Defee joined the Big 12 conference as a back judge in 2006 before being promoted in 2010 and for the last ten years, he and his gigantic arms have been making the egos and heads of referees bigger than ever. I am not going to sit here and point out all of his mistakes over the years because I wouldn’t want to bore you to death and quite frankly, it would be the year 2025 by the time I got done with the list of screw ups.

For me, the final straw with Defee was in this past season’s Red River Showdown as Mike issued an unsportsmanlike conduct penalty on every player from both teams (Texas and Oklahoma) thirty minutes before kickoff due to some trash talking before the game. It is Oklahoma and Texas. It’s a rivalry game for crying out loud. We are talking about over a century of hate and Mike Defee acted like it was someone throwing a punch in a pillow fight.

But of course, the embarrassment did not stop there as Mr. Defee left his mic on for all ninety plus thousand on hand to hear during the coin toss as he told the team captains “We are going to play this game with sportsmanship. Are we clear?” And after he made sure everyone in the stands knew that he was in charge of the game, he answered several questions from a reporter after the game saying, “What happened out there is an embarrassment to everyone.” No Mike, the only embarrassment in the Cotton Bowl that day was you and the Texas defense. Not to mention on the same day as this game happened, another embarrassment by his colleagues were working their magic in Waco as Texas Tech got hosed on a “Illegal Snap” call in overtime against Baylor.

Maybe I am being a bit harsh on Mike. Nobody is perfect and I wish him the best of luck in the NFL officiating office. But with that said, he is the NFL’s problem now. With him leaving, maybe the conference can get an upgrade in officiating that they desperately need.