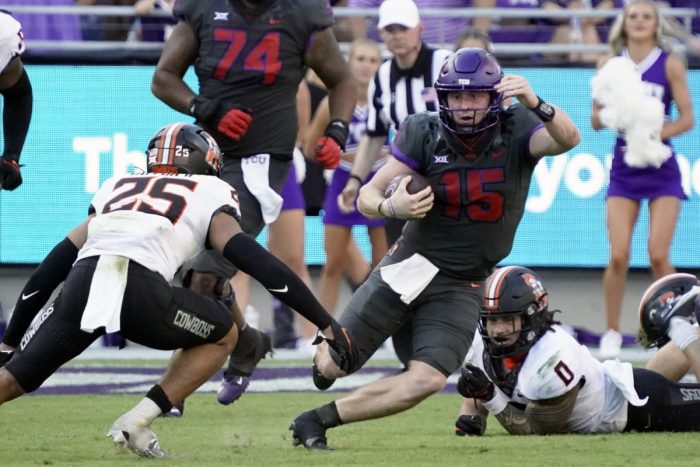 The Heisman Trophy is awarded annually to the most outstanding player in college football. According to the official mission statement, winners epitomize great ability combined with diligence, perseverance, and hard work.

And if the Heisman Trophy voters are serious about finding the candidate who fits that mission statement, they need to look no further than TCU quarterback Max Duggan.

If it’s all about just the best statistics, Duggan isn’t your guy, but there’s nothing in the description of the Heisman Trophy that makes it a stat-driven award. That being said, Duggan’s season was nothing to scoff at. He finished with 3,321 passing yards, 30 touchdowns, four interceptions, all while completing 64.9% of his passes.

However, the Duggan story is what makes him the best player to win the Heisman Trophy. Max Duggan was kind, but kind of not, the starting quarterback at TCU to end last season. This came during another mediocre season of TCU football where the head coach who he came to play for, Gary Patterson, was fired in October. Chandler Morris ended up as the starter in the second half of the 2021 season, but Duggan got to finish out the season to preserve Morris’ redshirt. The writing was on the wall that those around TCU felt Chandler Morris would be the guy going forward.

Many in Duggan’s situation would have hit the transfer portal. Why not? Your coach is gone. You lost the starting job. Start over fresh. Move on. Guarantee yourself a starting job somewhere. Duggan did not do that.

During the summer, the two quarterbacks competed for the starting quarterback job, alternating snaps in practice and trying to make their case as the first-stringer. Still, TCU coach Sonny Dykes didn’t publicly reveal who won the spot until the season opener on Sept. 2, when Morris opened the game.

Late in the third quarter, Morris sustained a left knee injury and never returned, as Duggan took over.

Max Duggan never looked back and neither did the Horned Frogs who rolled their way to a perfect 12-0 regular season, an epic comeback that came up short in the Big 12 Championship Game, but still earned a berth in the College Football Playoff.

And here’s the icing on the cake we should not forget: Back in 2020, doctors discovered that Duggan had a rare abnormality in his heart called Wolff-Parkinson-White syndrome. It turned out he had the condition since birth, and it required a procedure if he was going to be able to continue playing football. Of course, we know the story from there on the football field.

When combining diligence, perseverance, and hard work, Max Duggan’s last 30 months embodies everything the Heisman Trophy is supposed to stand for, and for that matter college football.

And in many ways, his story has become the antithesis of what college football has turned into in recent years, especially in the era of transfer portal. That’s not being an anti-transfer portal guy. I can appreciate more player mobility, although it’s gotten completely out of hand.

But when players are encouraged to pack their backs and leave at the first sign of adversity, Max Duggan passed. He did the opposite of what 99% of college football players in his position would have done. He stayed. He committed to his program and team. And even after he didn’t win the starting job, he put himself in a position to be ready for his moment, which came earlier than anyone could have anticipated. And then he made more of that moment than anyone would have ever predicted.

Max Duggan should be the Heisman Trophy winner.