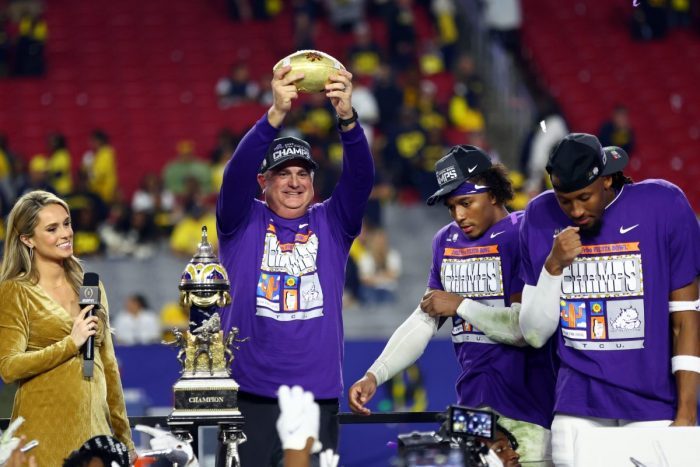 In the summer of 2022, Big 12 Media members cast their votes to predict the Big 12 standings for football this season. As you’ve heard, the TCU Horned Frogs were picked to finish seventh in that poll, just ahead of West Virginia, Texas Tech, and Kansas.

Then and there, the doubt began for the Horned Frogs. After a 3-0 start, TCU was tasked with taking on the 18th-ranked Oklahoma Sooners, and after walking a mudhole dry through OU, they finally entered the Top 25 at No. 17. From that point on, TCU climbed the polls and the Big 12 standings as they stacked win after win. Along the way, Sonny Dykes’ squad downed five ranked teams and fought their way to an undefeated regular season.

Despite a loss in the Big 12 Championship to Kansas State, a team they’d already beaten, TCU had proven it was worthy of a College Football Playoff berth and was rewarded with just that on Selection Sunday.

However, that still wasn’t enough for notable national media pundits like Steven A. Smith and Paul Finebaum.

“Hell no they didn’t get it right,” Smith said. “Where’s Alabama? Where’s Alabama? Nick Saban did one thing wrong: the argument that he was making should’ve been made weeks earlier. I felt that it was delayed, that was it. Outside of that, Paul Finebaum, I don’t understand this!

“TCU, you know you ain’t those dudes, okay? And you know everybody is looking at you, undefeated, and questioning your schedule, questioning whether or not you’re those guys. You’ve got a conference championship against Kansas State, and you can’t get it done… You ain’t the SEC, you ain’t the Pac-12, you ain’t the Big Ten. The bottom line is, as a result, you understood the pressure that came with being in that moment, you were supposed to respond, but you didn’t do it.”

Chris Simms, former Texas quarterback and now NFL analyst for NBC, even had something to say about TCU getting into the playoff.

Well, the Horned Frogs heard the noise, ignored it, and went out and proved it on the field on New Years’ Eve. In the days and weeks leading up to the game, TCU kept hearing that Michigan’s physicality would be too much and that they couldn’t match up with the Big Ten’s best.

Michigan players joked that they didn’t know where the Horned Frogs played, or that they’d better not bring their 3-3-5 defense into the game, or it would be a “smash fest.” Then, TCU went out and secured two pick-sixes, outrushed the mighty Michigan offense 263-186, and beat Michigan 51-45 in front of over 20 million fans on Saturday night.

After the game, Sonny Dykes was asked if his team was aware of Michigan’s confidence coming into the game and if that motivated them.

“You know what’s funny? That kind of stuff hasn’t really bothered us,” Dykes said. “We said it a million times, but, look, we were picked seventh in the preseason poll in the Big 12. So at some point, you kind of just quit listening to what everybody says, and it doesn’t really affect you.

“I think that’s what’s been so great about these guys. They have kept a really steady mindset from the beginning. Early on, we were told how bad we were. As we got a little better, we were told we could be
pretty good. Then all of a sudden, how great we were and all that stuff.

“Our guys never changed, you know what I mean? They didn’t change personally. Nobody all of a sudden became a tough person to deal with. Everybody’s just kept a great mindset.

“Look, I heard it. It frustrated me. Again, I believe in our players. Look, I think we’re a physical, tough-minded football team. It bothered me that we heard all week about how we were going to get lined up and run through and all that stuff. And I’m sure these guys were extra motivated.

“But at the same time, look, they do their jobs. They do it with great pride. They prepared incredibly well. We had three weeks of outstanding practices. I thought we had a really good plan coming to the bowl site and handling it the way we handled it. These guys were the biggest part of that.

“We didn’t have a player miss curfew. We didn’t have anybody late to anything. They had a business
mentality when we got here to Phoenix and it carried over to the game.”

When the players were asked if they felt disrespected coming into the game, they were honest about the noise before the game.

“I definitely think that it motivated us,” LB Dee Winters, who had one of two pick-sixes in the game, said of the doubt. ” We heard all week that they were going to out-physical us. I think, like you said, it just gave us a little bit of motivation. So I think the guys handled it well during practicing and were very physical, and it showcased tonight.”

TCU wide receiver Quentin Johnston, who had six receptions for 163 yards, including a 76-yard touchdown, said that he didn’t really pay attention to the noise but just kept working.

“I’ve been hearing stuff like that as long as I can remember,” Johnston said. “But at the end of the day, that’s a part of it. That’s a part of good competition, and that’s what makes it on the field.

“Me personally, I don’t really like to get caught up in the social media, he-said, she-said stuff like that,
because at the end of the day, we got a job to do and that’s playing football.

“In big games like this, I tend to stay off social media, just going on people’s pages looking about what
they’re talking about, because at the end of the day, it doesn’t really matter if they can’t perform on the
field.”

Then, after the players answered the question, Dykes interjected and made it known that they expected the noise to ramp up again this week before the title game.

“We got to do what we did this game. We’ve got to answer that criticism and show up and do what we’re
supposed to do.

“If we think that’s going away, I think you guys all know that’s not. That’s just the way it is.”

Well, he was right. The noise around TCU’s chances against Georgia is quite loud, and Vegas naming Georgia as a 13.5-point favorite in this game speaks volumes to that. If that spread holds, which it is as of Thursday afternoon, it will be the largest spread for a national championship game in College Football Playoff and BCS history.

Chris Beard Fired by University of Texas
Watch: Gary Patterson Gets Emotional When Talking About TCU
To Top