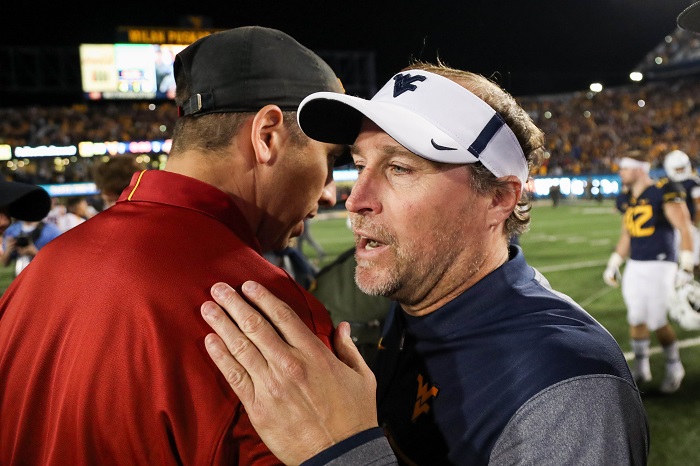 After West Virginia’s disastrous 30-14 loss on Saturday night in Ames, Iowa to the Cyclones, ending their undefeated season, Dana Holgorsen was none too pleased with Iowa State fans storming the field.

In Monday’s Big 12 Teleconference, Holgorsen said, “It was very unprofessional. It’s our job to keep student-athletes in a safe place. When you’ve got thousands of people coming at you, it’s not good. The league has rules and the league has bans against that for a reason. Our job is to keep players safe. We didn’t have time to get them of the field. That wasn’t good.”

Holgorsen appeared frustrated that he could not shake Matt Campbell’s hand at midfield after the loss, but added, unlike what happened when Texas Tech upset WVU in basketball last season, there were no incidents between staff, players and Iowa State fans, which is obviously a good thing. But Holgorsen did say he was nervous, adding, “It was dicey there for a while. We rushed the main guys off, but the rest of them were kind of on their own. We’re lucky none of them got hurt.”

Matt Campbell took to the Big 12 teleconference after Holgorsen, but did not take the bait when asked about the comments, simply commenting, “I really thought our administration handled it really well. I know myself and a couple of our staff members instead of celebrating went over and made sure the West Virginia kids got off the field safely. I don’t have any comment toward that. I thought, obviously, a moment of excitement for our fan base, but I thought our administration and I know our coaching staff did the number one priority, and the number one priority was making sure their kids got off the field safely.”

Can we get these two teams back on the field again sooner than later?