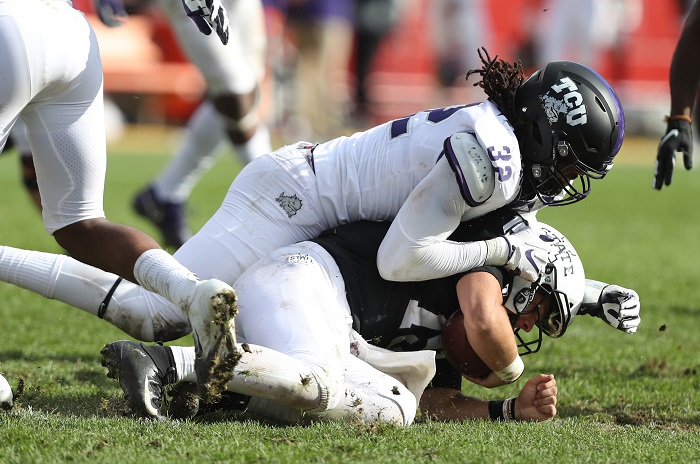 Texas could not continue the trend of stacking its roster with proven talent on Saturday, as former TCU Horned Frog Ochaun Mathis has elected to take his talents to Nebraska instead of joining the Longhorns.

Texas was predicted by many to be the favorites for Mathis, as the Frogs brought in former TCU head coach Gary Patterson as an assistant to the head coach. Patterson was the head coach at TCU when they landed the talented three-star edge rusher out of Manor, Texas.

However, in a video shared on Twitter on Saturday, Mathis picked the Huskers.

Mathis morphed into a two-time All-Big 12 defensive end and is rated as a four-star (92.000) transfer and the 25th ranked player in the portal. In three seasons’ work, Mathis has recorded 135 tackles, 30.5 tackles for loss, 15.5 sacks, one forced fumble, and one fumble recovery.

Along with Texas, Mathis chose the Huskers over USC, Ole Miss, Penn State, Nebraska, and his former school who made a strong push at the end with the enticement of NIL endorsements.

For Texas, it still has been an incredibly successful offseason in the portal, landing generational talent Quinn Ewers at quarterback, a pair of four-star pass-catchers from Alabama, with WR Agiye Hall and TE Jahleel Billingsley, and four-star WR Isaiah Neyor from Wyoming.