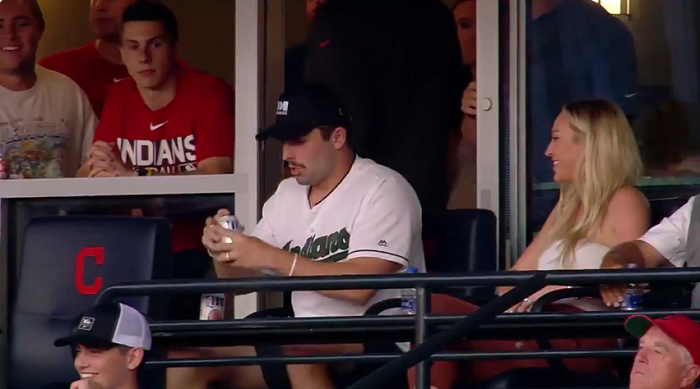 Baker Mayfield continues to buck the trend of what a franchise quarterback is supposed to act like and how a franchise quarterback is supposed to behave. And frankly, if he succeeds on the field, none of this will matter. But when it’s early August and everyone is dying for some real football, be it college or NFL, and sorry, the NFL Hall of Fame game does not count, Baker Mayfield shotgunning a beer at a Cleveland Indians game makes for sports talk fodder.

"I just don’t like the idea of my franchise quarterback spending time at a baseball game. I mean, what are you doing, @bakermayfield? You don’t see guys like Aaron Rodgers shotgunning beers. Just not a good look. Go watch some film." – @ColinCowherd (probably)

The clip is pushing 3.5 million views as of Sunday morning. Whether you love Baker or hate him, the clip is pretty great. And whoever runs the social media account for the Cleveland Indians deserves a raise. The jab at Colin Cowherd is gold. There was the time Mayfield brilliantly handled his interview with Cowherd. Also, how about the time Joel Klatt put Cowherd in his place regarding Mayfield? So this is well deserved on all fronts.

Anyway, can we finally just get some real football being played? Four weeks from yesterday we will have exactly that!