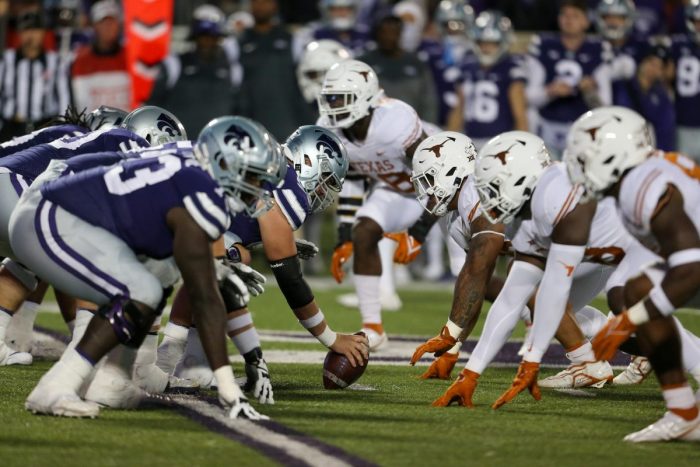 Week 10 of the Big 12 football season is in the books as the college football season begins the final month of the regular season. There were five games this week, with TCU beating Texas Tech 34-24, Baylor getting by Oklahoma 38-35, Iowa State over West Virginia 31-14, Kansas rolling Oklahoma State 37-16 and Texas getting by Kansas State 34-27.

So with another wild week in the books, here are the five biggest takeaways from Week 10 in the Big 12 Conference.

1. Kansas is Bowling For the First Time Since 2008

Entering the season, Kansas’ over/under win total was 2.5. And not only did they top that number by Week 3, they are now bowl eligible by the first Saturday in November for the first time since 2008 thanks to their 37-16 win over Oklahoma State. The win snapped a three-game losing streak for the Jayhawks who are now 6-3 on the season as Lance Leipold continues to solidify himself as the Coach of the Year in college football (sorry, Josh Heupel).

This has been a tremendous season in Lawrence, and let’s not forget he’s done it for the last month of the season with a back up quarterback in Jason Bean, who started Saturday’s game and played well going 18/23 for 203 yards, two touchdowns and zero interceptions, while rushing for 93 yards, including a 73-yard touchdown run.

The days of Kansas being a pushover and guaranteed Big 12 win are long gone as this league is continuing to prove it is the deepest conference in college football this season. And it’s really not all that close.

Baylor and Texas both had to win their games to stay in the Big 12 Title race, and they each did just that on Saturday. Baylor won on the road as underdogs against Oklahoma, while Texas took care of K-State in Manhattan.

Both teams were in must-win situations and got it done, in large part thanks to key turnovers and their respective defenses down the stretch.

So the Big 12 has TCU at the top at 6-0 in league play, and then three 4-2 teams in Baylor, Texas and Kansas State. The Horned Frogs play Texas and Baylor the next two weeks, which will go a long way in determining who plays for a Big 12 Championship on December 3rd at AT&T Stadium in Arlington.

3. When Does it End for Neal Brown?

On Friday, I wrote that if Neal Brown and the Mountaineers couldn’t cover this spread in Ames, then he might get the USC-Lane Kiffin treatment and be left on the tarmac on the way home. In all seriousness, that’s a douche move I wouldn’t wish on anyone, but we’ve all seen enough.

Neal Brown has to go. Rip the band aid off.

This team isn’t just bad, it’s sloppy and undisciplined. They had seven more penalties on Saturday for 64 yards. Their 57 penalties are the most of any team in the Big 12 Conference.

All WVU fans were rooting for Neal Brown and “Trusted the Climb”. But it’s not happening. WVU is 3-6, and barring them winning out against Oklahoma, K-State and Oklahoma State, it’s another season without a bowl game for the Mountaineers. And at this point, 3-9 and a last place finish in the Big 12 is much more likely than 6-6.

I hate to sound like a broken record, but at this point it feels like we’re all waiting for the inevitable.

Oklahoma State lost 37-16 at Kansas on Saturday. The Pokes have now been outscored 85-16 the last two weeks against both Kansas schools.

Despite the fact that defensive coordinator Derek Mason reportedly ripped his players in the locker room at halftime after falling behind 24-7, the Cowboys didn’t exactly get the second half off on the right foot either. They had allowed 350 yards in the first half and then the Jayhawks took the first drive of the third quarter 75 yards in 15 plays for a score to go up 31-7.

It’s back to the drawing board for that side of the ball, but the good news is that they face Iowa State’s offense next week.

5. How Does TCU Get Screwed by the CFB Playoff Committee This Week?

TCU should be in the Top 4 of the CFB Playoff rankings on Tuesday night. There’s no question. No. 1 Tennessee got blown out. No. 4 Clemson got crushed by Notre Dame. No. 5 Michigan trailed Rutgers at halftime before blowing it out in the second half. And No. 6 Alabama lost to No. 10 LSU.

If TCU isn’t in the Top 4 on Tuesday night, than this whole process is way more rigged than I could have ever imagined. Yes, TCU didn’t play its best against Texas Tech. But TCU was also playing much better competition than say, Michigan or Ohio State, so not playing your best but still getting a win against a solid Texas Tech team is nothing to be ashamed about. In fact, it should be rewarded.

I’m just interested in finding out if CFB Playoff committee chair Boo Corrigan‘s standards are the same as last week, especially when he criticized TCU’s balance between offense and defense, along with their needing to come back in games.

At this point, I’m more than prepared to be disappointed by them.

Three Thoughts on Texas’ 34-27 Win Over Kansas State
College GameDay Returns to Austin for TCU vs. Texas
To Top