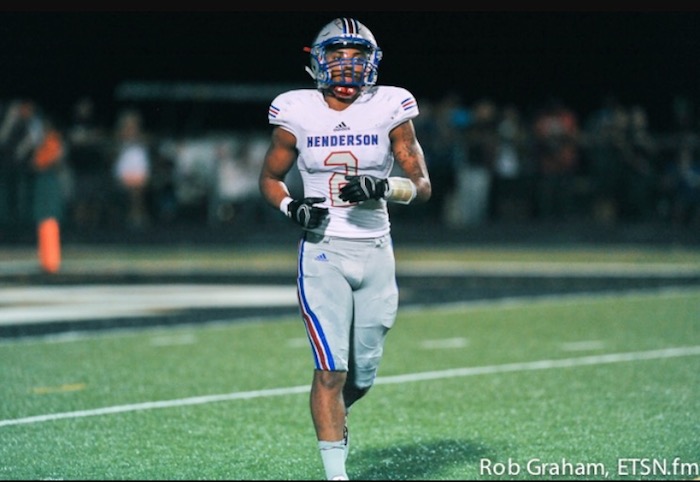 Often times when talking to high school or college football players, I’ll ask them what their future holds, and the answer is often playing in the NFL or coaching. There’s nothing wrong with that answer. None at all.

But, when talking to Baylor WR commit Trestan Ebner from Henderson, TX (population: 13,700), his answer to this question is when I knew he was different. Ebner told me his ultimate professional goal is, “to be happy and try to spread peace across the world to make it a better place.”

Whoa. That’s not what I expected. But, Ebner is a young man all about family and faith.

He’s in the middle of 4 siblings, number 3 to be exact. His older siblings Tre and Tiana were athletes themselves. Tre played basketball at Kilgore College, about 22 miles north of Henderson. Tiana was involved with cheer, while Aacie is the youngest sister and sibling of the bunch.

Ebner’s elder siblings, Tre and Tiana, are both living in the family’s hometown of Henderson, and Trestan happily noted he would be interested in moving back to his hometown after retirement.

The battle for Ebner’s abilities came down to a pair of Big 12 schools: TCU and Baylor. He chose Baylor in the past couple of days and cited new head coach Matt Rhule’s approach, to which Ebner said, “Just his attitude, you can tell he’s an honest guy and he shoots it straight with you. He’s a great guy.”

As for the Big 12, Ebner added, “I just love the conference. I think it’s the best conference in college football and it produces a ton of great athletes.”

Ebner, who started playing football at 9 years old and calls his mother his greatest role model, is a San Francisco 49ers fan and calls Odell Beckham Jr. his favorite player because he loves his “game and his swagger.” Coach Rhule will gladly take anyone who can mirror his game after Beckham (but, my guess is he could likely skip on some of OBJ’s sideline antics!).

As Ebner embarks on his next journey in life, there is no doubt that family and faith will remain a part of him moving forward; especially when thinking back to his hometown of Henderson, which Ebner raved about, saying, “The people that are here support our football team and our players so much. Every week you can count on our games being similar to a Green Bay Packers game.”

Well, if Coach Rhule has his way on the recruiting trail, McLane Stadium may, once again, start to mirror Lambeau Field … or in Ebner’s case, Lion Stadium in Henderson, Texas.