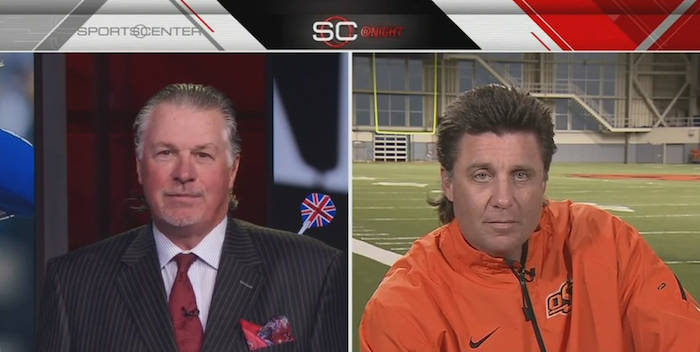 It wasn’t quite like revealing an oscar winner, but we officially have the name of the Mike Gundy mullet.

Why? “In the summer, back in July, the mullet wasn’t really that long. There was a behind the scenes production guy at Big 12 media days and the mullet talk was spreading through the hotel. And he had just made reference that it wasn’t a mullet but just an Arkansas Waterfall. But then as the season went on, it grew into a mullet.”

Gundy added his wife “kinda likes it”, but added his boys were skeptical at first.

Here is the complete video on SportsCenter with Barry Melrose.

It just doesn’t get savvier than what Gundy has going on in Stillwater with his mullet. How else would the Oklahoma State head football coach find himself on SportsCenter in the middle of February? There is no chance!

I was concerned Gundy might say goodbye to the Party in the Back after the 2016 season, but it’s honestly looking sharp as ever.

He’s got a little extra swagger and pep in his step. But not sure if that’s the Mike Gundy mullet or the fact that he has Mason Rudolph and James Washington coming back next season.

Which Big 12 coaches would make the best politicians?
Big 12 redshirt freshmen to watch in 2017
To Top