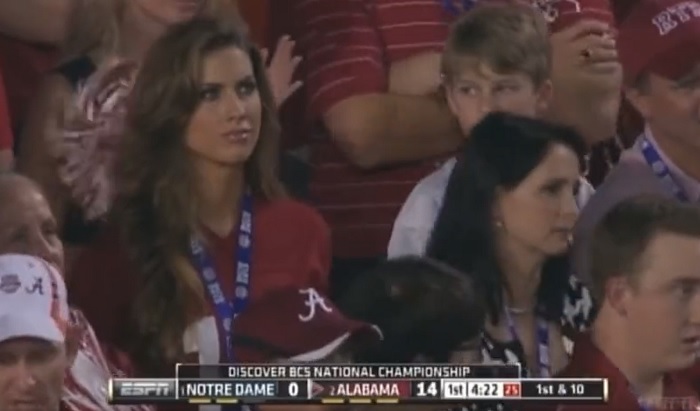 Boy, time sure does fly when you’re enjoying college football.

With only the National Championship Game left for the 2022 college football season, it’s the time of the year when many of us get nostalgic about the sport.

That was certainly the case on Saturday, as we celebrated the 10-year anniversay of one of the most epic, uncomfortable, awkward and incredible moments of a college football game. During the 2012 National Championship game between Alabama and Notre Dame, former ESPN play-by-play man Brent Musburger went on what has since become a legendary moment in TV sports broadcasting. This is the kind of stuff they don’t teach you in broadcasting school (and probably shouldn’t).

When the cameras showed Alabama QB A.J. McCarron’s girlfriend, Katherine Webb, on TV, Musburger said, “Wow, I’m telling you, you quarterbacks, you get all the good-looking women. What a beautiful woman.”

But my favorite line was Musburger’s bit of advice, “So if you’re a youngster in Alabama, start getting the football out and throwing it around the backyard with Pop.”

I wonder, how many thousands of young boys in Alabama took Musburger’s advice that fateful night 10 years ago and are on their way to being top recruits in the Class of 2023, 2024 and 2025? Will we ever really know?

Oh, and if you’re wondering, McCarron and Webb have been married since 2014 and have three sons of their own.